Kumbar, Lokhande, Waghmare, and Rashmi: Study to evaluate obstructive sleep apnea in metabolic syndrome at a tertiary hospital in India

Background: Obstructive sleep apnea (OSA) is a prevalent sleep disorder known to be associated with cardiovascular risk factors and metabolic syndrome (MetS). The studies on OSA burden in MetS patients in India is scarce.

Aim: To study prevalence of OSA in MetS and to study factors associated with OSA among MetS.

Settings and design: Hospital based cross-sectional study was conducted for 2 years (year 2015-2016) at a Tertiary Care Teaching Hospital in Pune.

Materials and Methods: MetS patients aged ≥18 years, of either sex were included in this study. Polysomnography was performed in all patients and grading of OSA severity was based on the apnea-hypopnea index (AHI).

Statistical analysis: Data was analyzed in SPSS V:20. To find association of OSA with MetS and its components, statistical tests like chi-square, independent student t–test and One-way ANOVA test were applied.

Obstructive sleep apnea (OSA) is a sleep disorder characterized by recurrent upper airway obstruction during sleep, leading to intermittent breathing pauses alveolar hypoventilation and intermittent arousal from sleep. These in turn result in imbalances in arterial blood gas levels and acid base levels.1 OSA is associated with insulin resistance, hypertension and cardiovascular morbidities. Worldwide OSA prevalence ranges between 17–24% for men and 5–9% for women.2, 3, 4, 5, 6, 7 The prevalence of OSA in Delhi was found to be 13.7% among men and 3.6% among women.8

Recent studies have focused on understanding the etiology for exponential rise and wide range in OSA prevalence (14-55%) and the association of OSA with metabolic syndrome, obesity and diabetes mellitus. Metabolic syndrome (MetS) is a group of several cardiovascular risk factors like central obesity, dyslipidemia, higher blood pressure levels and blood glucose levels, with raises the prothrombotic and inflammatory states.2, 3, 4, 5, 6, 7 The prevalence of obesity and MetS is rapidly increasing in India leading to increased mortality and morbidity due to CVD and Type 2 Diabetes mellitus (T2DM). About 1/3rd of India’s urban population has MetS.2, 3, 4, 5, 6, 7 OSA has been independently associated with insulin resistance, implying OSA may be an important factor for T2DM and MetS.2, 3, 4, 5, 6, 7

Polysomnography is the gold standard test for diagnosis of OSA, estimation of its severity and measurement of treatment response.9, 10 Earlier detection of obstructive sleep apnea in MetS and initiation of Continuous Positive Airway Pressure (CPAP) therapy in the earlier stages of the disease are known to improve not only OSA, but also metabolic syndrome components. Hence, early detection and management of OSA in Metabolic syndrome is essential. A majority (80%) of OSA cases remain undiagnosed.2, 3, 4, 5, 6, 7 Patients with untreated OSA suffer from a wide range of complications like diabetes, hypertension, glaucoma and various cardiovascular adverse events, that lead to increased healthcare expenditures and high consumption of healthcare resources. Whereas, the timely and effective management of OSA can substantially minimize the complications, morbidity profile as well as out of pocket expenditures.1, 5, 7 As the data on OSA in metabolic syndrome in India is scarce, the present study was conducted with the aim and objectives: a) To estimate the prevalence of obstructive sleep apnea among metabolic syndrome patients by conducting polysomnography and b) to study the factors associated with OSA among these patients.

This Hospital based cross-sectional study was conducted at the out-patient departments of Department of Pulmonary Medicine and General Medicine of B.J. Government Medical College and Sassoon General Hospitals, Pune, Maharashtra. The study was done for a period of 2 years from 1st January 2015 to 31st December 2016. Approval from Institutional Ethics committee was obtained prior to commencement of the study. Patients visiting the out-patient department of Pulmonary Medicine and General Medicine were screened for metabolic syndrome and those who were diagnosed to be suffering from Metabolic syndrome according to 2005. After explaining the purpose of the study and obtaining their written informed consent, patients were included in the study.

Criteria were considered for the study.11, 12

Patients with metabolic syndrome who fulfilled the study eligibility criteria were included in the study after explaining the purpose of the study and obtaining their informed consent. Thorough clinical history and examination was performed. Socio-demographic profile of participants were noted in a pre-formed, semi-structured proforma, by interview method. Patients’ BMI, blood pressure (recorded after at least 5 minutes of rest in both arms sitting/supine position) and waist circumference (measured in a horizontal plane midway between the inferior margin of the ribs and superior border of the iliac crest) were measured.

Blood samples of 5ml collected after 12 hours overnight fasting for the measurement of lipid profile, fasting blood glucose. The patients were screened for symptoms of OSA. Epworth sleepiness scale was used to screen for Excessive Daytime Sleepiness (EDS). Physical examination was performed to look for upper airway anatomy (Mallampati grading was used). Patients were subjected to overnight Polysomnography.

Upper airway anatomy is involved in the pathogenesis of OSA. 15, 16 Modified Mallampati classification is a standard method to evaluate the patient’s airway for intubation, performed pre-operatively for predicting a difficult endotracheal intubation. it is a useful sign in the clinical assessment of OSA. It is based on the morphology of the oropharynx, which is also a simple assessment tool for OSA. 16 Patients were made to sit at eye level to the investigator, with mouth fully open and tongue maximally protruded and patients were asked not to phonate. The class is then graded based on the visibility of the airway structures. Class I: Soft palate, fauces, uvula, and pillars are seen, Class II: Soft palate, fauces, and uvula are seen, Class III: Soft palate and base of uvula seen, Class IV: Soft palate not visible.15, 16

Epworth Sleepiness Scale (ESS) is a self-administered questionnaire which assesses daytime functioning including concentration levels, work performance and sleepiness.17 ESS scale has 8 questions with a 4-point scale ranging from 0-3, wherein, ‘0’ indicates ‘would never nod off’, while ‘3’ indicates a strong chance of nodding off. The ESS scale questions elicit the information in 8 different situations of daily life. 17 ESS total score is attained by the adding all the individual item scores. The ESS score range is 0 to 24. Higher ESS total scores indicate greater degree of daytime sleepiness in respondent.

Diagram depicting distribution of symptoms among the study participants (N=60) 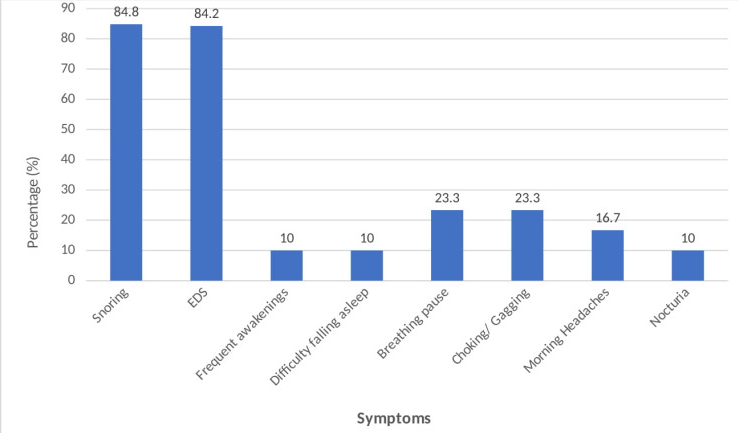 Grades of severity of OSA based on polysomnography 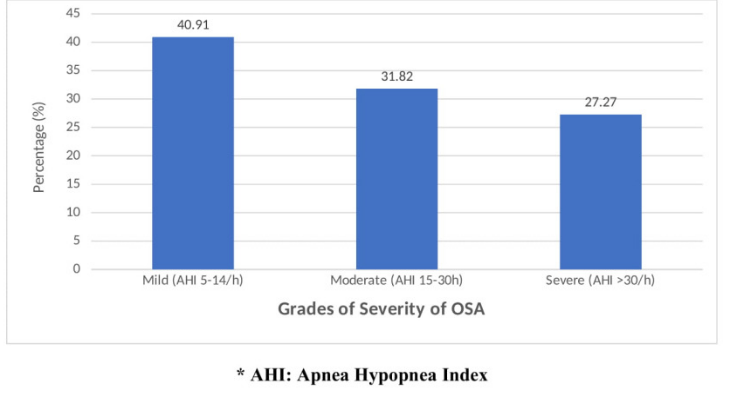 Metabolic syndrome in Indian subcontinent has shown an increasing trend with a wide range of prevalence (11-40%).12, 18 ‘Syndrome Z’ terminology was coined by Wilcox et al., to describe clinical condition with a combination of metabolic syndrome (Syndrome X) and OSA.12, 19 Untreated and severe grades of OSA lead to endocrine hormonal imbalances due to increased systemic inflammation and sympathetic over-activity, thereby worsening metabolic syndrome.

The present study was conducted at a tertiary care teaching hospital at Pune, Maharashtra. It was found that the prevalence of obstructive sleep apnea among metabolic syndrome patients was 73.3%. Similar higher rates of OSA in MetS are found in studies conducted by Soin D. et al.12, 20, 21 In OSA patients, intermittent and repeated upper airway obstruction during sleep due to recurrent collapse of the pharyngeal airway, result in hypopnoeic or apnoeic episodes despite ongoing breathing efforts. These breathing disruptions lead to intermittent blood gas disturbances (hypercapnia and hypoxemia) and surges of sympathetic activation. These recurrent episodes lead to altered breathing cycles and disturbed sleep.22 Snoring was the predominant symptom reported among OSA patient group (76.7%). Other symptoms reported were excessive daytime sleepiness (63.3%), breathing pause and choking (23.3%). (Figure 1). Similar results were found in studies conducted by Young et al., and Udwadia et al.,23, 24.

The age of youngest patient in present study was 28 years, while oldest patient was 75 years old. The average age of patients in the study was 48.67±13.46 years. The study documented a significantly higher preponderance of OSA to males (81.0%) compared to females (55.6%) and to older age group (50.68±14.15 years). Similar results of higher prevalence of OSA with male gender and older age group are found in majority of studies.3, 8, 10, 12, 21 This gender related protective effect among females, decreases in post-menopausal phase in those who are not receiving hormone replacement therapy. In addition to the lesser likelihood of women being evaluated and treated for OSA, effect of sex hormones, craniofacial morphology, pattern of fat deposition, differences in upper airway shape and genioglossal muscle activity during the wake state and control of ventilation, have been proposed to account for a higher male risk of OSA.23

Obesity, more importantly, central obesity is more crucial for OSA than either age or sex, as it has greater impact on the upper airway function due to associated increased neck circumference, resulting in smaller upper airway area and greater compression on airway while sleeping. There is graded increase in OSA prevalence and OSA severity with increasing The Body Mass Index (BMI). Central obesity leads to resistance to leptin, thereby production of leptin is enhanced. Leptin increases the likelihood of obstructive sleep apnea, whereas weight reduction leads to reduction of apnea-hypopnea episodes per hour.8, 9, 10, 12, 21, 24 Accordingly, present study has shown that obesity, larger waist and neck circumferences were found to be significantly associated with OSA and OSA severity (84.4% obese patients had OSA. (Table 2)

The present study showed that there is a very high prevalence of obstructive sleep apnea among patients with metabolic syndrome. Central obesity, with higher body mass index levels, larger waist circumference and neck circumferences, were the striking features of OSA patients. And these higher levels were found to be significantly associated with severe grades of OSA. Dyslipidemia is another major parameter that was found to be highly predominant among OSA patients. OSA group had significantly higher levels serum triglyceride and lower levels of HDL cholesterol. Also, the present study documented a trend of increased fasting blood sugar levels, increased systolic and diastolic blood pressure levels associated with moderate and severe OSA grades (severe OSA group), but these associations were not statistically significant. Thus, the present study has reiterated the fact that OSA is associated with higher levels of metabolic dysfunction. The coexistence of both OSA and MetS, within the same patient has shown a greater derangement of metabolic functions and disruption of endocrine homeostasis.12, 21

Treatment of obstructive sleep apnoea with Continuous Positive Airway Pressure (CPAP) therapy in the earlier stages of the disease is known to be effective in controlling apnoea, daytime sleepiness. Scientific literature has shown that CPAP therapy also provides effective control on metabolic syndrome components like diabetes mellitus and hypertension, by reducing insulin resistance, reducing blood pressure and blood glucose levels, by controlling dyslipidemia, thereby reducing the adverse cardiovascular events.5, 7, 12, 21, 26 There is a need for greater focus on early diagnosis of obstructive sleep apnea by the physicians at all levels, by using a simple self-administered Epsworth Sleepiness Scale, further to be followed by the overnight polysomnography, which is the gold standard for diagnosing OSA. This screening and early detection of OSA among general population and specifically among metabolic syndrome patients, can go a long way in improving the longevity and improve the health outcomes among patients with metabolic syndrome and obstructive sleep apnea.

Strengths of the study

The study has highlighted the raised prevalence of OSA in metabolic syndrome. The study has shown the levels of metabolic dysfunctions that exist in the various grades of severity of OSA.

Limitations of the study

This is a hospital-based study. Hence, the results cannot be generalized and causal inferences cannot be derived.