The fungal infection clinically referred as mycormycosis also zygomycosis are common infections to human where causative agent i.e., Mucoromycotina is member of mucorales. The causative agent mucoromycotina habitats in soil and decaying organic matter. The mycoromycotina infection remains associated with wide array of human disease including septic arthritis, dialysis-associated peritonitis, renal disorders, gastritis, and pulmonary diseases. These infections are closely associated with mucous layer of skin precisely cutaneous layer. These infections are also seen in clinical samples to nasal and upper respiratory tract. The higher prevalence of nasal cerebral i.e. rhinocerebral mycormycosis reported in case of immune compromised patients that trigger colonization of R. oryzae. In chronic state as infection reaches to lower respiratory tract these infection are difficult to diagnose and treat due to lack of precise methods. It has been reported neutropenia patients are more prone for mycormycosis infections due to extensive use of chemotherapy resulting impaired immunity. In recent time, necrotizing pneumonia is major symptoms reported in case of pulmonary mycormycosis. The common antifungal medication based clinical symptoms such as dyspnea, congestion and chest pain with rise in body temperature itraconozole is highly recommended. Further, a combination of antifungal and antimicrobial agents had shown a significant higher clinical recovery in mycormycosis case.

The cellular structural arrangement in fungi is unique and contains a higher content of a carbohydrate polymer as chitin, a polymer of N-acetyl glucosamine unlike peptidoglycan in most of bacteria.1 The mucor species Rhizopus, absidia, and Cunningham ella are key causative agent for mycormycosis in human.2 Mycormycosis frequently infects the sinuses, brain, or lungs.3 Uncontrolled sugar disease is a focal point in accelerating mucormycosis.4 Zygomycosis and Mucormycoses occur in soil, and their airborne spores often contaminate food and laboratory specimens and produce infections.5 Here, thrombosis and tissue necrosis are major symptoms in fungal infection and do require an antifungal drug therapy and surgery help remove the infected tissue.6 Mycormycosis is a rare but severe invasive fungal infection, mainly described in immune-compromised patients.7 Mycormycosis is a rare but severe invasive fungal infection occurring mostly in immune-compromised patients, especially in individuals diagnosed with uncontrolled diabetes mellitus or hematological malignancies and in previously healthy subjects with open wounds contaminated by Mucorales.8, 9 Life-threatening fungal infections have risen sharply in recent years, owing to advances and intensity of medical care that may blunt immunity in patients. These insights create a foundation for the development of new immune-based strategies for prevention or enhanced clearance of fungal diseases.10 Patients with severe acute respiratory syndrome coronavirus 2 (SARS-CoV-2) infections might develop coronavirus disease (COVID-19), which can be associated to significant and sustained lymphopenia compromising the immune system, especially in the most severe cases.11

Risk factors for invasive mycormycosis include long-term neutropenia, intravenous drug use, malnutrition, stem cell or solid organ transplantation, severe skin damages such as burns and surgical suture sites.12 Diagnosis is usually made by clinical suspicion and histopathological examination.13 Patients present with nonspecific symptoms like cough, dyspnea, chest pain, and fever.14 Clinical diagnosis is difficult in pulmonary mycormycosis, and early diagnosis is needed for this life-threatening infection.15 Weak host defences are a major risk factor for pulmonary mucormycosis. Neutropenic patients as well as patients with elevated serum iron levels are also at increased risk of developing mucormycosis.16 Pulmonary mucormycosis is a relatively rare pulmonary fungal disease, which is difficult to diagnose early and lacks effective treatment. It is seen in patients with haematological malignancies, diabetes mellitus, and immune-compromised states.17 The management of fungal infection require administration of antifungal therapeutics with and without surgical interventions.18 There is growing scientific reports on immune response of antifungal medication but still a large number of studies are not clinical based. Here, in case of fungal infection host response involves both cellular and humoral immunity. However, humoral immunity plays a larger role in offering protection against fungal infection. It has been also reported that cellular immunity associated with Th1-type offer a protective responses against fungal infection via secreting IFN-y. On the contrary, the response of Th2 via IL4 and IL10 triggers and facilitate fungal infection and pathological outcomes. Further, mononuclear immune cells start infiltration at the site of infection and offering a delayed immune activity favoring fungal infections.19 The poor immune surveillance and cellular immune activity was reported during chronic inflammatory diseases including diabetes and cancer.20

Considering an in vitro susceptibility data of mucor species still work in under progress. The new generation antifungal therapeutics including amphotericin B, Ketoconazole, itraconozole, and voriconazole, amphotericin B result in lowest minimum inhibitory concentration against mucor species. It has been also reported that MIC of ketoconazole and itraconozole was similar however, voriconazole results in higher MIC. Due to complex infection etiology the diagnosis and treatment of fungal species from Zygomycota is much difficult. The scientific reports states Zygomycota infections result in an invasion to vascular tissue leading to infarction causing higher mortality rate. Hence, an early and precise diagnosis of such fungal infection is essential for its management that includes administration of antifungal therapeutics and surgical interventions. In recent time, among all clinically available antifungal therapeutics Amphotericin B is one of most effective drug. There are several formulations of amphotericin B available including liposomal and lipid based amphotericin, colloidal dispersion of amphotericin B for most common fungal infections to human including zygomycosis. Impaired immunity is one of major risk factor for fungal infection and reversal of immune suppression is key parameter for modern fungal treatment approach. The reports also demonstrated that cytokines such as CSFs have a better clinical response. Still there is lack of data based on large number of clinical studies for efficacy of fluconazole and terbinafine in zygomycosis treatment. However, the combination of antifungal medications along broad spectrum antibiotics such as trovafloxacin or ciprofloxacin effective suppresses pulmonary zygomycosis in murine model.

A 72-year-old male, non-smoker, hypertensive, steroid-induced diabetic, hypothyroid serve as the case report subject. History of covid-19 pneumonia with severe ARDS in August 2020, he received antiviral Ramdevpir, methyl prednisolone 40mg thrice daily for 7 days, 40mg twice daily for 5 days, 20 mg twice daily for 7 days, two doses of convalescent Plasma and was given rehabilitation care. Tocilizumab was not given and discharged with a tapering dose of methylprednisolone from 16mg. After that, the patient presented with streaky hemoptysis. The patient is vitally stable. PET CT done on 25.09.2020 showed uptake in the right upper lobe, a 2.5cm nodule noted in the right upper lobe posterior segment with central cavitating necrosis and hypermetabolic mediastinal nodes hypermetabolic soft tissue nodules in right arm and thigh. 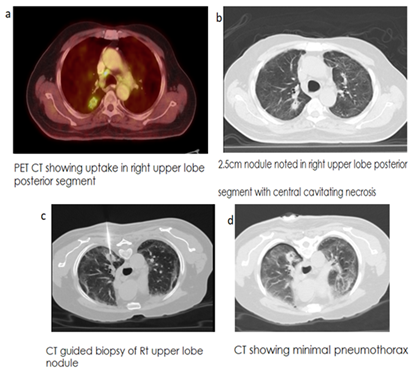 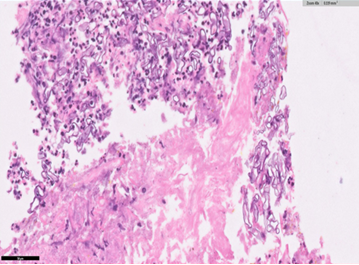 CT guided biopsy of the lesion was done.

A repeated PET CT showed no radiological improvement and uptake noted in the left upper lobe. Liposomal Amphotericin B dose increased to 10 mg/kg/day as the patient is not improving.

In large number of clinical cases, it has been reported that pulmonary mycormycosis as a life-threatening fungal infection. It also result in devastating and chronic disease outcome if fail to diagnose early and precisely. The entire medication; use of antifungal therapeutics relies on precise and early diagnosis of fungal infection. Here, during chronic state of pulmonary mycormycosis nasal cannula is essential for a week. In this case study, we report a stable condition of patient but require to intubate. Considering COVID 19 and association with lung 125mg methylprednisolone was administered with reducing three doses of 40mg for three a week. The case was managed successfully with use of methylprednisolone. Further, a patient was slowly weaned off from 02 supports. PICC line was kept under sterile aseptic precaution. Intermittent fever spikes were noted, blood culture sent from PICC line revealed growth of pain-sensitive Klebsiella, continued with the same antibiotic imipenem. During the course, patient had hypokalaemia and hypomagnesemia, and the correction was given. Also, creatinine levels started rising, and the maximum was up to 1.52. Hyponatremia was also there. Underlying diabetes has been managed effectively. Repeat PET CT showed partial metabolic response as compared to the previous scan. After six weeks, Liposomal Amphotericin B stopped and changed to oral Posaconazole at discharge. The patient came for follow-up after one month of verbal Posaconazole course.

The cases of mycormycosis are not new however; a spike in such cases has been reported during COVID era. The rise in cases of mycormycosis is due to COVID-19 remain associated with impaired immune system of infected patient. The central research institution across the globe including CDC emphasizes rise in mycormycosis cases after COVID-19 disease. The poor and or impaired immune functioning is major cause of rise in mycormycosis cases and clinical findings further confirmed. The cell mediated immunity such as Th1 and IFN-y are primarily involved in offering protection during viral infections. However, novel SARS-CoV-2 infection remains associated with impaired functioning of not only cellular but also humoral immunity triggers higher risk of fungal infection. Further, not only novel SARS-CoV-2 infection but also treatment associated with administration of anti-inflammatory and immunosuppressive drug further raise the risk of fungal infections. The lack of selective methods for fungal infection diagnosis, culture and treatment results in necrotic and inflammatory outcome of mycormycosis.

The term mycosis is common term use to describe infection caused by fungi. The grown research evidence demonstrated that saprophytic zygomycetes are rarely seen in the tissue of immune compromised patients. On the contrary, the chronic diseases such as diabetes both type I and type II, tumor, and metabolic inflammation such fungal infections have seen significantly due to poor immunity. The fungal infection caused by Rhizopus, mucor, and zygomycetes primarily enter into blood vessels and trigger thrombosis as one of major hallmark of chronic fungal infections. The thrombosis cases are more common in para nasal sinus and lower respiratory tissue such as lungs causing ischemic cascade along with self induce tissue damage. The laboratory culture of these of fungal species is difficult due to lack of additive growth media but infected tissue can serve as ideal source of these organisms. Here, histological tissue samples of infected patients offer non-septate, irregular hyphae more likely in case of thromboses blood vessels.21 A large number of fungal species infecting human do not cause any disease but promote allergic reactions once colonize into tissue. The risk factor for fungal infections including mycosis includes metabolic syndrome and inflammatory disorders like diabetes both type I and type II, tumors, immunosuppressant intake, long term cancer chemotherapy and radiotherapy.22 The treatment of mycormycosis largely depends on early and precise diagnosis followed by long term use of combination of antifungal medications.

Author would like to acknowledge Apollo Institute of Medical Science and Research Hyderabad, India for providing facility.