Bhardwaj and Shah: A cross-sectional study to correlate demographic and clinical profile of multi-drug resistant tuberculosis patients in a tertiary hospital

Background: One of the major hurdles in eradication of Tuberculosis is the development of Multi-drug resistant Tuberculosis, which needs timely identification and treatment to avoid its spread in the community.

Aim: The present study is an attempt to correlate demographic and clinical profile of multi drug-resistant tuberculosis cases coming to the facility

Materials and Methods: Among subjects diagnosed as Multi-drug Resistant Tuberculosis over a period of one and a half years from May 2016 to November 2017. A detailed clinical profile physical examination and laboratory investigations were done and correlated with demographic profile.

Statistical analysis: Data was analyzed in Open source software OpenEpi. P value was considered to be significant at P<0.05. Arithmetic Mean was used wherever deemed necessary.

Results: Majority of patients were aged between 40 to 50 years with Male to female ratio was 1.5:1. Most patients were farmers, home makers (unemployed), and labourers and had a low education with lower socioeconomic status. The symptom profile indicated weight loss, loss of appetite, cough with expectoration, dyspnoea and fever. 70% of the patients had haemoglobin levels < or = 10 g/dl. A high proportion of patients had normal TLC (Total Leucocyte Count) levels (n=21; 70%), thus indicating the absence of an inflammatory condition. A major proportion of patients (n=24; 80%) had lymphocyte count > 20. The patients had high prevalence of co-morbidities.

Conclusions: Most of patients of multidrug resistant tuberculosis (MDR-TB)were 40 to 50 years of age with male predominance from lower socio-economic strata, had a low annual income and a positive history of tuberculosis. Multidisciplinary approach for the management of MDR-TB is needed.

Tuberculosis (TB) is a major global health threat as per the World Health Organization (WHO). Alarmingly, most of the cases occur in low and middle-income countries.1 India is one of the biggest contributors towards the global burden of tuberculosis and it alone accounts for 26% of tuberculosis cases throughout the world.2, 1

Although, concerted global efforts to tackle with the problem of tuberculosis have been taken globally, yet the response is not encouraging and the globally targeted deadlines for complete eradication of tuberculosis still remain to be achieved. One of the reason for this could be attributed to the increasing problem of drug-resistance.

Multi-drug resistant tuberculosis (MDR-TB) is defined as Mycobacterium tuberculosis resistant to isoniazid and rifampicin with or without resistance to other drugs.3 Resistance of rifampicin is only 2% despite the high level 18% of initial resistance to isoniazid.4 As per WHO, in 2009, 99,000 cases of MDR-TB emerged in India including outside RNTCP. 2 Timely identification of MDR-TB cases is essential to stop the transmission of MDR TB in the community.

A Hospital-based Cross-sectional Observational Study was carried out in Department of Respiratory Medicine of Smt. B.K. Shah Medical Institute and Research Center and Dhiraj Hospital, Vadodara, Gujarat, among subjects more than 18 years of age, suffering from any form of TB, and diagnosed as MDR-TB by the Revised National Tuberculosis Control Program Guidelines over a period of one year and six months from May 2016 to November 2017, IEC approval was obtained on 7th April 2016 from Institutional Ethical Committee. After obtaining informed consent from the subjects, a detailed clinical history was taken and physical examination and laboratory investigations were done and the clinical profile was correlated with demographic profile.

The present study was carried out with an aim to study the clinical profile of multi drug-resistant tuberculosis cases coming to our facility. For this purpose a total of 30 patients falling in sampling frame were enrolled in the study. 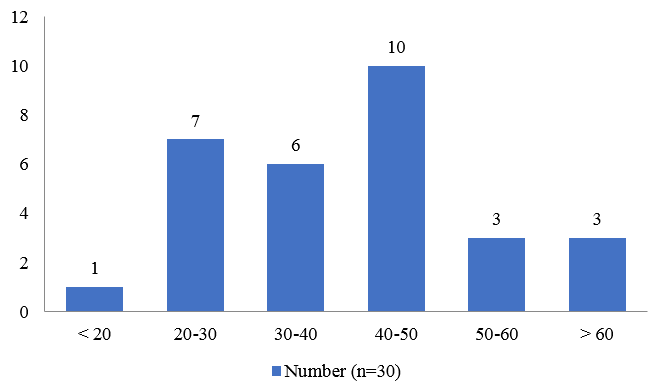 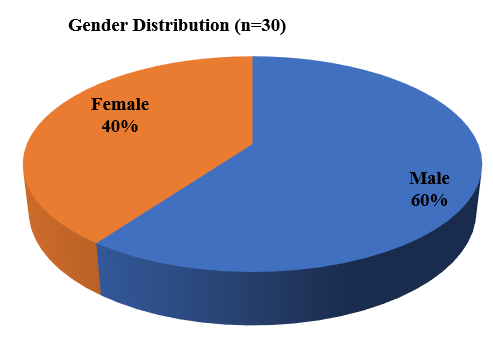 Majority of the population were illiterate i.e. n=10, which contributes for 33.33% of total cases, whereas 17%, 13%, 17% and 20% had primary, secondary, intermediate and graduate level of education respectively.

Occupation of the patients

Majority of the patients were farmer by occupation, i.e. n=11, which contributes for 36.67% of the total cases, whereas house wives contributed for 30% (n=9) of cases.

Annual income of the patients

Co-morbidities of the patients

Majority of the patients didn’t have any co-morbidities, i.e. n=13, which contributes to 43% of the total cases, whereas 20%, 20%, 10% and 7% of patients had Diabetes Mellitus, COPD, Hypertension and Cor-pulmonale respectively.

Signs and symptoms of the patients

Details about sputum for AFB 1

Details about sputum for AFB 2

Majority of the cases showed resistance to rifampicin, i.e. n=28, which contributes for 93.33% of the total cases; however 6.67% of cases responded negative for rifampicin resistance.

Majority of the cases responded negative for rifampicin resistance, i.e. n=28, which contributes for 93.33% of the total cases; however 6.67% of cases showed resistance to rifampicin. 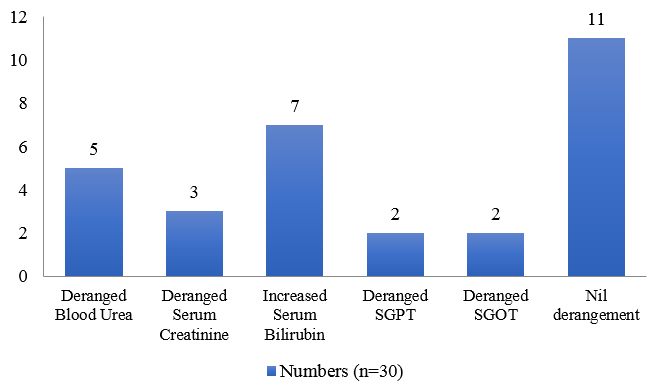 In majority of the cases there were nil derangements of biochemical parameters were seen, i.e. n= 11, which contributes to 36.67% of the total cases. However, increased levels of serum Bilirubin, deranged blood urea, deranged serum creatinine level, deranged SGPT and SGOT levels contributes for 23.33%, 16.67%, 10%, 6.67% and 6.67% cases respectively.

The prevalence of multidrug resistant tuberculosis is mainly dependent on ignorance, incomplete treatment and non-compliance, a poor socioeconomic status irrespective of age and gender and a worse clinical profile often associated with co-morbidities.5, 6, 7, 8, 9

In our study males (n=18, 60%) outnumbered females (n=12, 40%), however, some overseas workers believe that females are predisposed to a higher risk of MDR TB.5, 10 However, Indian studies have shown a higher prevalence of males as compared to females.11 Lower female ratio in present study could be owing to the gender biased difference in health services utilization in our country.12 As present study was a hospital based study, hence these results could vary when conducted in community.

Majority of our patients were farmers by occupation and home makers (unemployed), some were labourers and had a low education, thus indicating a lower socioeconomic status, which has been stated to be a natural risk factor for development of MDR tuberculosis.5, 6, 7, 8, 9

The patients had high prevalence of co-morbidities, including hypertension, COPD, Diabetes, Cor Pulmonale etc. which affected their haematological and immunological profile too. These findings are similar to those reported by Sharma et al., in 2011.13 MDR patients are generally immune-compromised and susceptible to opportunistic co-morbidities too. Similar observations were also made by Javia et al., in 2013.14

The symptom profile indicated weight loss, loss of appetite, cough with expectoration, dyspnoea and on & off fever as the major presenting symptoms in majority of the cases. Multiple symptoms were seen in all the patients, thus indicating a very poor and concerning health status of patients. Similar to present study, Javiaet al.,14 showed a high prevalence of cough (100%), fever (95%) and weight loss (60%).

Although, 28 out of 30 patients were sputum positive, a total of 2 (6.67%) were shown to be sputum negative even after repeated sputum examination. Sputum positivity is a doubtful criteria and often results in false positivity as well as false negative results and that is why the sputum positivity is determined on the basis of two sputum positive results. However, on Bactec, all the patients were found to be positive. According to many authors, the fastest and most sensitive cultural tool for the diagnosis of mycobacterial infections is radiometric method (BACTEC; Becton Dickinson, Towson, Md.)15 However, gene expression which is considered to be a more specific technique was found to be negative in 6.67% cases. Considering the focus of study on a more sensitive technique, the bactec technique seems to be appropriate choice.

In present study, majority of patients had haemoglobin levels < or = 10 g/dl (70%). It was interesting to see that a high proportion of patients had normal TLC levels (n=21; 70%), thus indicating the absence of an inflammatory condition. MDR tuberculosis is a chronic condition; it triggers a set of systemic events that eventually lead to increase in inflammatory marker levels. According to Tsuyuguchi.,16 MDR-TB is often accompanied with the immunosuppression of the host, this eventually results in initiation of co-morbid conditions and opportunistic infections which subsequently result in an inflammatory status. In present study, a major proportion of patients (n=24; 80%) had lymphocyte count > 20 which might correspond to the peripheral blood lymphocytosis produced during the initial weeks of M. tuberculosis infection; however, the immunological mechanisms that lead to this phenomenon are not completely understood. In patients with pulmonary tuberculosis, it is quite obvious that they had a lower number of lymphocytes than healthy controls. 17 This was also reflected in derangement of different biochemical parameters too.

The findings of present study showed that MDR tuberculosis patients generally had a poor health status profile that was reflected with presence of number of co-morbidities, manifestations of MDR treatment side effects and haematological and biochemical derangements thus presenting a highly immune-compromised status of patients. Considering the chronic nature and poor immunity of MDR patients’, aggressive measures needs to be considered to overcome this issue which is prevalent in our nation. In the light of these findings, it is very important that specific strategies for management of MDR tuberculosis should be evolved through the help of a multidisciplinary treatment planning.

On the basis of present study, it was concluded that most of patients of Multidrug resistant Tuberculosis belong to age group between 40 to 50 years with male predominance. The patients in general were from lower socio-economic strata, had a low annual income and a positive history of tuberculosis. The findings indicated the need to emphasize on the multidisciplinary approach for the management of MDR tuberculosis.

© This is an open access article distributed under the terms of the Creative Commons Attribution License Attribution 4.0 International (CC BY 4.0). which permits unrestricted use, distribution, and reproduction in any medium, provided the original author and source are credited.