Eldaabousy, Awad, Hassan, and Nour: Neck circumference as a predictor for the presence and the severity of obstructive sleep apnea in snoring patients

Aim of the study: To assess if the neck circumference (NC) can be used to predict the presence and the severity of obstructive sleep apnea syndrome (OSA) in a group of patients had snoring and witnessed apnea from Almoosa Hospital, Alhasa, Saudi Arabia.

Materials and Methods: A retrospective study for patients had snoring and witnessed apnea referred to a sleep lab for the diagnosis of obstructive sleep apnea (OSA) by overnight full polysomnogram from August 2016 to August 2020. Apnea-hypopnea index (AHI) was used to categorize the severity of sleep apnea. Age, sex, neck circumference (NC) body mass index (BMI), comorbidities, and sleep parameters were recorded. Receiver-operating characteristic (ROC) curve was used to assess the ability of NC for the diagnosis of the OSA. Sensitivity and specificity were calculated for different cut-off points.

Results: The study included 450 patients who met the inclusion criteria with a mean age 52.5 ± 14.6. The mean NC (cm), and BMI were 39.4 ± 3.1, and 35.2 ± 9.0, respectively. OSA was diagnosed in 378 (84.0%) patients. OSA was more detected among males, those with an increased age, NC, BMI, and among patients had hypertension and type 2 diabetes. The mean BMI was significantly higher among females (p=0.031) while NC was significantly higher among males. Significant positive correlations were detected between both NC and BMI with the severity of OSA.

Conclusion: Neck circumference can be used to predict the presence as well as the severity of obstructive sleep apnea in snoring patients. BMI, and male gender are independent predictors.

Obesity is a global health problem that affects people all over the world.1 Obesity is becoming more common in Saudi Arabia, and it is now recognized as a major risk factor for a variety of diseases, including hypertension, type 2 diabetes, obstructive sleep apnea (OSA), cardiovascular disease (CVD), and others.2 Obesity is common in Saudi Arabia due to a variety of factors including sedentary behavior, biology, and dietary patterns.3 Via education, politicians, and healthcare professionals, there is a demand to raise national awareness about the effects of obesity to tackle it in the region.4

OSA is a well-known sleep disorder that causes airflow to stop or significantly decrease the airflow with the presence of respiratory effort. It is the most prevalent form of sleep-disordered breathing, and it is characterized by repeated episodes of upper airway collapse during sleep, which contributes to arousal, hypopnea, and apnea during sleep.5 Snoring, witnessed apneas, gasping and choking, nocturia, insomnia; disturbed sleep, prolonged daytime sleepiness, reduced concentration, morning headache, nocturia, non-refreshing sleep, and daytime exhaustion are all symptoms of obstructive sleep apnea.6 OSA's patients are more likely to have cardiovascular disease, asthma, stroke, type 2 diabetes, reduced brain ability, traffic crashes, workplace or social disorders, and depression.7 OSA should be diagnosed and treated as soon as possible to increase the quality of life and prevent morbidity and mortality. The gold standard diagnostic procedure is a polysomnography (PSG). PSG is a fundamental procedure to accurately diagnose OSA and to assess treatment benefit.5

Tonsil size, Mallampati score, neck circumference (NC), and body mass index (BMI) are all predictors for obstructive sleep apnea.8 Male gender, advanced age, and hypertension are all risk factors for OSA.9 NC was shown to be strongly NC had a direct correlation with BMI in both men and women, with BMI in both men and women, the NC is considered an essential parameter for the diagnosis of OSA. In one study, OSA was seen in 30% of patients with an NC of 43 cm in males and 38 cm in females.10 OSA is a common condition in Saudi Arabia, affecting at least 4.0 percent of males and 1.8 percent of females, respectively. 11 Male gender, advanced age, obesity, and hypertension were all independent predictors of OSA in Saudis.11 We aimed to assess if the neck circumference (NC) can be used to predict the presence and the severity of obstructive sleep apnea syndrome (OSA) in a group of patients had snoring and witnessed apnea from Almoosa Hospital, Alhasa, Saudi Arabia

A retrospective study was performed at Almoosa Hospital, Alhasa, Saudi Arabia, during the period from August 2016 to August 2020. Patients had snoring and witnessed apnea with possible obstructive sleep apnea tracked across the inpatient and outpatient hospital settings. *Ethical approval was obtained from the Institutional Review Board at our hospital (IRB log nombur:ARC-21.03.3).

The study population included all patients who visited our hospital during the study period with a chief complaint of snoring and witnessed apnea, and who underwent overnight polysomnography. The exclusion criteria: 1-age less than 14 years 2- those diagnosed before as obstructive sleep apnea 3- those had central sleep apnea 4- those did tonsillectomy or uveoplataophyrngoplasty for the treatment for sleep apnea.

Demographics data were obtaining from the YASASSI program that is a unique program used in the outpatient and inpatient hospital setting. YASASSI is a Healthcare Information System (HIS) designed to help all types of healthcare facilities. This system is helpful in saving lives, improving quality of healthcare services, and reducing costs because it is a simplified system, ease of use, improve work flow, and reduce clinical errors.

Age, sex, height, weight, BMI, co-morbidities (like type 2 diabetes, hypertension, ischemic heart disease, bronchial asthma, chronic obstructive pulmonary disease, cerebrovascular stroke, and renal disease), and NC were determined from the patients file. Height in centimeters was measured. Weight in kilograms was measured. BMI is the weight in kilograms divided by the height in meters (kg / m2). NC in centimeters was measured with a tape at the level of the cricoid thyroid membrane.

Apnea is the cessation of airflow for more than 10 seconds, hypopnea is the decrease in airflow by at least 50% that persisted for more than 10 seconds and accompanied by oxygen desaturation of at least 3% or by arousal, and respiratory effort–related arousal is the increase in respiratory effort for at least 10 seconds leading to an arousal from sleep but one that does not fulfill the criteria for a hypopnea or apnea.13 AHI equal the total number of respiratory events (apnea plus hypopnea) per hour of sleep. Maximal and Nadir oxygen saturation recorded. Total limb movement (number/H), and periodic limb movement (number/H) were recorded. Heart rate average, lowest, and arrhythmias were recorded.

Split night procedure was used, after the diagnosis of obstructive sleep apnea we started positive airway pressure titration to reach lowest pressure can decrease the events of AHI less than 5 events/H and maintain oxygen saturation at least 92%.

The diagnosis of OSA was made based on AHI ≥ 5 with witnessed snoring or apnea,13, 14 which was used to divide the patients into two groups based on the presence and absence of apnea. In addition, we categorized. The severity of sleep apnea was classified to three groups: mild if AHI ≥5 to ≤15, moderate if AHI ≥15 to ≤30, and severe if AHI ≥30.

Statistical analysis using the SPSS computer package version 25.0 (IBM SPSS Statistics for Windows, Version 25.0. Armonk, NY: IBM Corp., USA) was carried out. For descriptive statistics: the mean ± SD was used for quantitative variables while frequency and percentage was used for qualitative variables. Chi-square test or Fisher’s exact test were used to assess the differences in frequency of qualitative variables, while Mann-Whitney test or Kruskal-Wallis test were used to assess the differences in means of quantitative nonparametric variables. Spearman correlation coefficient was used to measure the strength and direction of association between OSA severity (indicated by AHI) and both NC and BMI. ROC curve analysis was used to assess the diagnostic ability of different cut-offs of NC and BMI for the prediction of OSA that maximizes both sensitivity and specificity. The statistical methods were verified, assuming a significant level of p< 0.05 and a highly significant level of p< 0.001.

General and clinical characteristics of the studied sample.

Sleep parameters among the studied samples.

CRP was higher among patients with OSA than non-OSA.(Table 3).

Laboratory findings of the studied samples.

Relation between the severity of obstructive sleep apnea and different study variables. 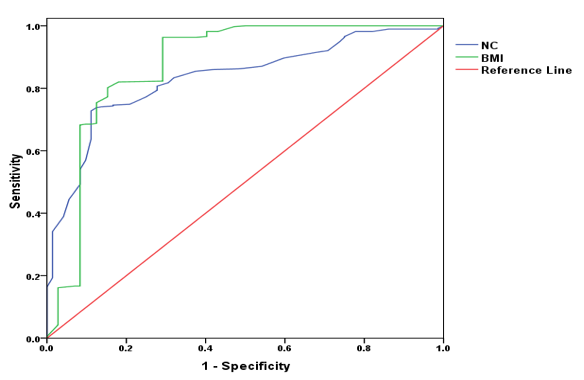 Obstructive sleep apnea (OSA) is a common sleep condition that can cause a variety of complications, including death. OSA should be diagnosed and treated as soon as possible. A polysomnography is needed to reliably diagnose OSA and determine the treatment's effectiveness; however, it is costly, has minimal supply, and requires complex technical assistance. Predictors for obstructive sleep apnea could help to reduce the number of patients seen for polysomnography while still saving money for the patients.15

Eighty-four percent (84%) of our patients had OSA, with male patients accounting for 54.8 percent. These results are consistent with those of Alshehri et al., who discovered that 74.8 percent of the patients surveyed had OSA, with the majority of them being males. Obesity and snoring were found to be more common in men.16 In general, females have a lower incidence of OSA than males, regardless of age or weight. The composition and function of the upper airway differs in men and women due to the influence of fat distribution, or sex hormones, and sleep apnea in women is most often misdiagnosed as depression, diabetes mellitus or hypertension.17

The majority of our patients were obese, with a mean BMI of BMI was 32.6 ± 9.3 for people without OSA and 35.7 ± 8.9 for people with OSA for those with OSA, and a good relationship between BMI and OSA severity. Obesity and OSA incidence seem to be related, according to these results. Pharyngeal fat is a type of excess fat that forms in a person's neck as a result of obesity. When the airway is already relaxed, pharyngeal fat will obstruct a person's upper airway during sleep. Excess abdominal fat may also compress a person's chest wall, reducing lung capacity and resulting in decreased ventilation, allowing the upper airway more prone to collapse while sleeping.18

According to Alshehri et al., 70% of their study population was obese, and the prevalence and incidence of OSA were substantially higher in obese patients than in non-obese patients.16 In a similar sample, the OSA group had a higher BMI than the control group in a Turkish retrospective study.19

Results of the present study revealed that NC (39.6 3.0), BMI (35.7 8.9), and old age (55.5 13.3) were the variables that predicted the prevalence and magnitude of OSA in the study patients. Furthermore, the greatest positive correlations between AHI and NC (p =0.004) and BMI (p0.001) were found. Larger neck circumferences are usually linked to a higher risk of OSA, and it can be a better predictor of OSA than BMI. In one study, people with OSA had a 4 cm greater neck diameter than people who didn't have it. Furthermore, regardless of gender, a neck diameter of 40 cm or greater had a sensitivity of 61% and a specificity of 93% for OSA.20

In congruent with our results, KIM et al.21 Pinto et al.22 and Ghuman et al.23 Hoffstein and Mateika,24 and Katz et al.25 reported that old age and high neck circumference were risk factors for the presence of OSA, while hypertension and large NC were associated with the severity of OSA. They showed that AHI and neck circumference have the highest positive association (r=0.416), and that neck circumference is more correlated with OSA than BMI or age.

According to Oğretmenoğlu et al., BMI together with body fat correlates more strongly with the AHI. Unlike other published articles, these studies conclude that the NC has a weak correlation with OSA.6

In snoring patients, neck circumference is considered a reliable predictor of the presence and severity of obstructive sleep apnea. BMI and male gender are also other independent predictors.

WHO: Obesity and overweight. 2016. Avaialable from URL:- https://www.who.int/mediacentre/factsheets/fs311/en. Last accessed 2021 on May 2

K A Alshehri L F Bashamakh H M Alshamrani I O Alghamdi B A Mahin A A Alharbi Pattern and severity of sleep apnea in a Saudi sleep center: The impact of obesityJ Fam Community Med20192612732