Reddy, Nagkumar, Bindu, and Reddy: Association between obesity and c reactive protein among patients with risk factors for cardiovascular disease

Background: One of the main markers of inflammation is C reactive protein, which is normally raised in patients with myocardial infarction, vascular diseases, stroke or sudden cardiac death. Obesity is associated with a raised CRP level probably due to the cytokine stimulation by the adipose tissues. Elevated CRP with an addition of overweight / obesity is a risk factor for cardiac disorders.

Materials and Methods: Demographic details were taken from 371 patients with cardiovascular risk factors and blood was sent for CRP and lipid profile. Height and weight were noted for the calculation of BMI.

Conclusions: The is a strong association between the increase in weight among the patients and elevated CRP levels Both these two are not only the risk factors of CVD, but also the cause of depression and reduced quality of life among the individuals.

Inflammation of the arteries is one of the causes of atherosclerosis.1, 2 One of the main markers of inflammation is C reactive protein, which is normally raised in patients with myocardial infarction, vascular diseases, stroke or sudden cardiac death.3, 4

The incidence of overweight and obese persons in increasing worldwide probably due to inactivity of the people with very less physical activity, change of life style and diet. This is seen more so among the children and adolescents, where in the subjects prefer to be indoors with internet rather that physical exercise outdoors. This may lead in atherosclerosis and elevated blood pressure as they grow older.10 In the United states alone it is reported that >50% of the adults are overweight and around one in every five individuals is obese. The fatality rates among the obese individuals is also high.11, 12

Obesity is associated with a raised CRP level probably due to the cytokine stimulation by the adipose tissues. Elevated CRP with an addition of overweight/obesity is a risk factor for cardiac disorders. Other independent factors for the cardiovascular diseases are diabetes, hypertension, and insulin resistance. Elevated CRP for longer periods is a feature of acute inflammation, probably due to an ongoing inflammation, and must be differentiated from chronic infection. Therefore, a CRP test must be done to confirm after 2 weeks of the first test.

We had performed this study to assess the association between obesity and elevated levels of CRP.

This cross sectional study was performed by the Department of Medicine and Microbiology at Mallareddy Institute of Medical Sciences from June 2019 to September 2021. This study was cleared by the institutional Ethical Committee. 371 patients with cardiovascular risk factors who had come to our hospital for treatment were explained the nature of the study in detail and were enrolled into the study after obtaining the informed consent. A detailed medical history was taken for all the patients and demographic details were also noted. All pregnant women were excluded from the study and patients who had overt inflammatory diseases were also excluded. Patients who were on drugs for hypertension or diabetes mellitus were also excluded from the study.

All the patients were asked about history of smoking, alcoholism, familial status diabetes etc. and the details were noted. The height and weight of the patients was taken and body mass index was calculated.

Demographic variables among the males and females under study

CRP levels based on BMI 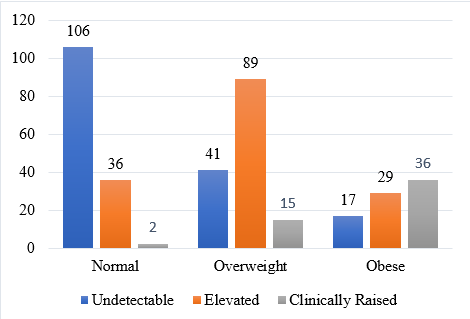 Obesity is one of the most common condition which impairs health and quality of life among the people, not to mention leading to depression. This condition, along with other risk factors, lead to atherosclerosis and cardiovascular diseases. Apart from obesity, low grade inflammation is also said to be a risk factor. 13, 14

In this study, we assessed the increased CRP levels among the increase in weight of the patients. The number of males in our study was higher than the females with a male to female ratio of 2.1:1. However, more percentage of women than men were either overweight or obese. This could be because the men are more accessible to physical work, while the women mostly have a lesser amount of physical activity.

A positive association of elevated CRP levels and BMI was observed among the patients. Elevated CRP levels were seen in most of the overweight people and among obese patients, most were clinically raised CRP levels. A similar case was observed in a study by Aronson et al in Israel, who also reported a higher level of CRP concentrations among the patients with metabolic syndrome. Within crease in the metabolic disorders, they observed increase in the CRP levels.15 Similar results were observed in other studies also. 16, 17, 18, 19 A study by Nishide et al.,on children also reported a higher level of CRP among the obese children in comparison to the non-obese children. 20 A positive association between the Body intraabdominal adipose tissue, fat free mass and body fat and was found by Tchernof et al.,21 An association of elevated CRP was found to the visceral fat accumulation by Lemieux et al.22

Around 34% of the patients were on estrogen therapy. It was observed that such women were at greater risk of developing low grade inflammation.23

The increased CRP levels among the obese patients is attributed to the body fat. TNF – α and IL-6 are released by the adipose tissues and since there is a close association between the cytokines and CRP, as well as CRP and obesity, the levels are elevated.19, 22 It is believed that Interleukin – 6 which is released by the adipose tissue is the regulator of the CRP levels and in insulin resistant and obese individuals, it is the cause for the rise in the CRP levels.24

Low grade inflammation and obesity was also reported to be one of the causes of health related depression. A study by Meyer et al reported that obese patients who had depressive moods also had elevated CRP levels.25 Christian et al also reported that in elderly, the poor self-rated health is associated with an elevated CRP levels and IL-6 levels and thereby affecting the quality of life.23

There is a strong association between the increase in weight among the patients and elevated CRP levels. Higher CRP levels denote an infection or inflammation and is more common among the obese patients. Both these two are not only the risk factors of CVD, but also the cause of depression and reduced quality of life among the individuals. Therefore, an early detection is necessary to prevent CVD and improve quality of life.

© This is an open access article distributed under the terms of the Creative Commons Attribution License Attribution 4.0 International (CC BY 4.0). which permits unrestricted use, distribution, and reproduction in any medium, provided the original author and source are credited.