Eldaboosy and Awad: Testosterone undecanoate injection, a rare cause of diffuse alveolar hemorrhage: A case report from Almoosa Hospital

Testosterone undecanoate injection, a rare cause of diffuse alveolar hemorrhage: A case report from Almoosa Hospital

Many systemic and few respiratory (cough, pulmonary embolism) adverse effects follow anabolic agent use. Pulmonary hemorrhage is not considered one among them. We present a case of an adult Saudi male who developed diffuse alveolar hemorrhage (DAH) as a results of the utilization of injectable anabolic steroid hormone replacement therapy. The literature reported only three cases of DAH related to anabolic agent abuse. The patient was presented with acute dyspnea and hemoptysis with diffuse alveolar shadow on chest radiograph. The symptoms promptly resolved with cessation of exposure and recurrent after the reuse. Pulmonary hemorrhage as an acute complication of anabolic agent use must be considered when clinical and radiological findings support it. It's important to rule out the autoimmune and infectious-related causes before considering it drug-related. 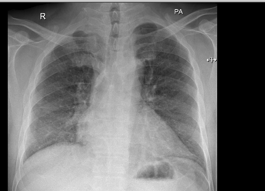 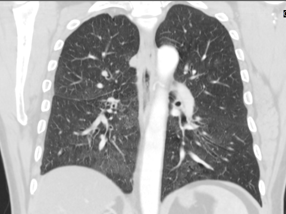 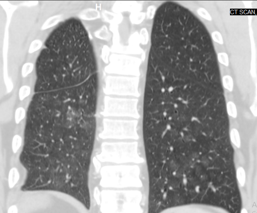 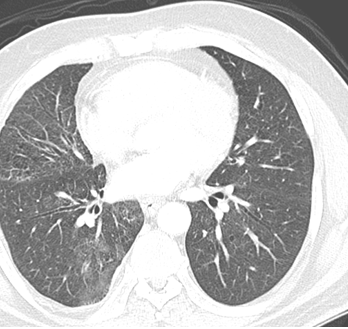 Oxygen therapy via nasal mask 2 lit/min started with slow perfusion of intravenous normal saline, and intravenous empirical antibiotic within the sort of ceftriaxone and azithromycin. Rapid respiratory panels and Middle East respiratory syndrome nasopharyngeal swabs were negative. Echocardiography was done and was normal apart from mild diastolic dysfunction. On the second day, flexible bronchoscopy is completed after consent under general anaesthesia which revealed a patent tracheobronchial tree with diffuse blood on most of the tracheobronchial tree. Bronchoalveolar lavage (BAL) was done from both lower lobes basal segments and both upper lobes anterior segments. The patient was managed with high dose corticosteroids, Methylprednisolone 1 gm intravenous once daily for three days followed by oral prednisolone 30 mg once daily. No pathogens were identified from the bronchoalveolar lavage Grams, Zeihl Nielsen stain, and culture. Cytological evaluation of the BAL sample revealed abundant red blood cells with numerous hemosiderin pigment-laden macrophages. Further investigations included Subsequent negative tests for antinuclear antibody, autoantibody, antineutrophil cytoplasmic antibodies, and anti-glomerular basement membrane. Ultrasound urogenital system normal both kidneys with mild prostate enlargement. In the case presented above, many other possible causes of pulmonary hemorrhage were considered and excluded, leaving testosterone-induced DAH because the presumably explanation for the patient’s presentation collagen vascular and vasculitides ruled out as a possible cause for the DAH. Deep review for the patient medication, he was using intramuscular Testosterone undecanoate injection 1 gm. intramuscular every 6 weeks to enhance the libido for two years. Testosterone injection was stopped and therefore the patient was discharged to home on oral prednisolone 25 mg once daily for two weeks and gradually withdrawn completely over the approaching 2 weeks. Regular follow up wiped out the outpatient pulmonology clinic for one month and he was symptoms-free. Follow up chest X-ray and CT thorax showed complete resolution of the interstitial shadows (Figure 5, Figure 6). 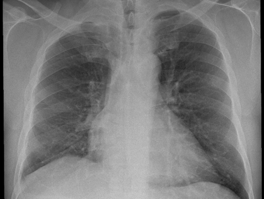 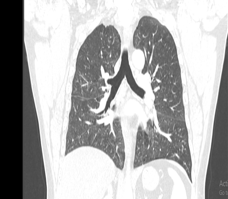 In January 2021, he had a new attack of a small amount of hemoptysis with new clinical and radiological findings like the first presentation. He said he reused testosterone injection again. The patient was advised to contact his urologist again to avoid the use of this medication in the future and a short course systemic corticosteroid was given in an outpatient setting.

A written informed consent was taken from the patient for publication of case details and accompanying images, and an approval from the ethical committee was done (IRB Log No: ARC-21.5.02).

DAH may be a rare, serious, and sometimes life-threatening clinical entity that refers to bleeding into the acinar portion of the lung thanks to the disruption of the alveolar-capillary basement membrane. the most causes of DAH are; autoimmune disorders (such as polyangiitis and granulomatosis formerly referred to as Wegener's granulomatosis and Goodpasture Syndrome systemic lupus erthymatosus and systemic sclerosis), pulmonary infections, toxic exposures, drug reactions (eg, propylthiouracil, diphenylhydantoin, amiodarone, methotrexate, montelukast, infliximab), cardiac disorders, and coagulation disorders. In one-third of the cases is idiopathic or associated with infections or drugs. 5, 6 DAH is characterized by the presence of dyspnea, cough, hemoptysis, anemia, and diffuse alveolar infiltration. Hemoptysis may develop for a couple of hours or a couple of days, but up to one-third of patients don't have hemoptysis. The alveolar infiltrates are often unilateral, and a drop by hematocrit or hemoglobin are often difficult to document. 6 Our case was presented with hemoptysis, dyspnea, mild anemia, and hypoxemia and diffuse alveolar infiltrate. Common causes of DAH are systemic vasculitis like Wegener's Granulomatosis, Churg-Strauss syndrome, and Microscopic polyangiitis,  Goodpasture syndrome, collagen vascular diseases which should be excluded before considering drug-related etiology. Routine laboratory tests like an entire blood count with differential, chemistry, liver tests, blood urea nitrogen, and creatinine, urinalysis with microscopic examination should be obtained altogether patients. In most patients with DAH, serum ANCA, anti-GBM antibodies, antinuclear antibody (ANA), and anti-phospholipid antibodies should be obtained. In our case immunological profile was negative and urine analysis, also as renal functions, were normal with a traditional coagulation profile. 7, 8 Patients suspected to possess DAH should generally undergo bronchoscopy and BAL to document the bleeding and rule out local causes like endoluminal mass or infection. 7 Our case bronchoscopy revealed bloody BAL without endoluminal lesion and negative microbiological panel for BAL. a scientific approach to early recognition, the establishment of diagnosis, and aggressive treatment will likely decrease the morbidity and mortality related to DAH. The diagnosis is formed by bronchoscopy with BAL, laboratory tests, including coagulation assays, platelet counts and, and an HRCT On HRCT alveolar hemorrhage is most frequently demonstrated as diffuse areas with ground glass shadowing. 6 There are three reported cases of alveolar hemorrhage related to steroid hormone abuse. There also are multiple cases of hemorrhage described in other organs after the utilization of anabolic steroids. 4 during this case, our patient was treated with high doses of corticosteroids for suspected vasculitis and given the high morbidity and mortality related to this pathology. He was also told to avoid re-administering this medication, not returning to episodes of alveolar hemorrhage, and with full recovery of the lung parenchyma as evidenced within the radiological and functional tests. In the previous case, no medical intervention was needed and both patients showed no signs of persistently reduced lung function but one case has taken an IV high dose of the corticosteroid like our case. The pathophysiological causes of alveolar hemorrhage after anabolic steroids aren't clear in these patients. Both within the cases previously described the symptoms appeared weeks after the administration of the drug and remitted when avoiding exposure thereto.7 But in our case, the symptoms occurred after months of use. Due to the low incidence of symptomatic events, radiological findings, bronchoalveolar lavage, clinical presentation, and therefore the patient's history can help make the diagnosis. The notice of the acute and possibly life-threatening adverse effects of steroid hormone abuse is important.

For any patient who has clinical and radiological suspicion of DAH, an in depth medication history to succeed in the diagnosis after rule out common causes. If DAH is suspected, bronchoscopy should be performed immediately to determine the diagnosis with routine and immunological profiles to rule out the common causes. The suspected medication because the cause for DAH should be withdrawn immediately.