Bachchan, Yadav, Rawal, and Rai: Mucormycosis involving paranasal sinuses in a post-COVID-19 patient with an uncontrolled diabetes-A rare presentation in an ongoing pandemic

Mucormycosis (MCR) involving paranasal sinuses is a rare life-threatening opportunistic infection in immunocompromised individuals. In humans, MCR is considered as one of the most rapidly progressive lethal forms of fungal infection with a high mortality rate of 70–100%. During the second wave of COVID-19 in India, the cases of MCR have increased rapidly. We herein report a case of a 70-year-old Indian male with an uncontrolled diabetes diagnosed as maxillary and ethmoid sinus MCR.

The current pandemic of coronavirus disease 2019 (COVID-19) caused by the severe acute respiratory syndrome coronavirus 2 (SARS-CoV-2) has resulted in large-scale morbidity and mortality.1 The situation in developing countries like India which have been facing the second wave of COVID-19 due to a new mutated variant of SARS-CoV-2 known as B.1.617 is really scary.2 The virus has not only affected the huge population in India directly but it has also resulted in the sudden development of rare opportunistic infections like Mucormycosis (MCR).3 There is a massive rise in the number of reported cases of MCR in India.3 The disease has burgeoned to such an extent that it has been declared an epidemic in many states of India.4

MCR is a rare devastating acute invasive filamentous fungal infection caused by inhalation of spores of ubiquitous fungi belonging to order Mucorales of family Mucoraceae.5 The disease becomes evident in individuals with a weak immune system either due to any preexisting disease like uncontrolled diabetes mellitus (DM), hematological malignancy, and patients on systemic corticosteroid use, prolonged neutropenia, or stem cell transplant.6 The lasting lymphopenia in severe COVID-19 cases could also be an essential contributor to the vulnerability of these patients to MCR.

In the present paper, the authors highlight a rare case of MCR involving the paranasal sinuses in an adult Indian male having been treated for COVID-19. The paper will serve as an important addition to the medical literature as a very high index of suspicion with aggressive management is required for a good prognosis since the case fatality rate is very high in MCR.

A 70 years old Indian male belonging to low socioeconomic status came to our outpatient department with complaints of pain in front of the left cheek for ten days. He also complained of recurrent headaches and fever for 20 days. The patient was apparently symptom-free 20 days back, then he developed a fever which was high grade, evening rise, and was not associated with chills or rigors and subsided with tablet Paracetamol. He also had a mild cough which was nonproductive, non-blood tinged, and non-foul smelling. His headaches used to worsen with the rise of fever. He also complained of blurring of vision in the left eye and running nose for the last one week. The patient was a known diabetic for five years however he was not taking any medications for the same. Also, there is a history of being treated at a private center for COVID-19 about 25 days back the details of the same were not available. He gave no history of malignancy or similar complaints in the family. There was no personal history of weight loss or loss of appetite. There was no history of any other major medical or surgical intervention in the past.

He was a farmer by profession with a history of bidi smoking (for 50 years) two packs per day, and he used to chew tobacco (for the last 40 years). There was no history of alcoholism or any other substance abuse. On examination, he was febrile to touch and his vitals were pulse-109/minute, arterial BP-130/90 mm of Hg, respiratory rate of 28 breaths/minute, Sp02-94% on room air, temperature- 101-degree centigrade. There was no pallor, edema, clubbing, cyanosis, icterus, or lymphadenopathy. The rest of the systemic examination was within normal limits.

Local examination revealed swelling with tenderness over the left malar region. There was slight drooping of the left upper eyelid but there was no blurring of vision [Figure 1]. There was no darkening of skin or mucosa seen in the mouth, or anywhere on the face. There was loosening of teeth (maxillary second molar with grade III mobility). The right eye was normal. Anterior rhinoscopy was suggestive of crusts present over the left inferior turbinate and blackish discoloration was seen. Considering him as a post-COVID19 case a detailed diagnostic work-up was done. His laboratory findings were significant for anemia (Hemoglobin- 9 gm/dL) and leukocytopenia (2.5 to 11.0 × 109/L). Nasal discharge, blood urine, and sputum turned to be negative for any bacteria on culture and negative for acid-fast bacilli on Ziehl–Neelsen staining. Serology testing for Human Immunodeficiency Virus was negative as well as immunoglobulin. Fasting blood sugar was 248 mg/dL and HbA1C was 9.8. At that time, a MRI Paranasal sinus was done which showed mucosal thickening obliterating the left maxillary antral cavity with soft tissue mass that extended to the ethmoid sinus with blocked left osteomeatal complex [Figure 2]. SPIN ECHOT1 and FAST SPIN ECHO T2W axial images of the face were obtained on a dedicated phased-array torso coil using a high gradient 1.5 TESLA system and correlated with STIR. Mucosal thickening in the left maxillary and bilateral ethmoid sinus with blocked left osteomeatal complex was seen. Diffuse subcutaneous and intramuscular edema in the left side of the face was seen in MRI. An orthopantomogram was also done, but no significant changes were noted. However, a paranasal sinus view (PNS) radiograph showed haziness of the left maxillary sinus [Figure 3]. 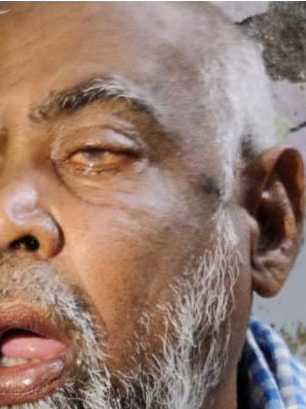 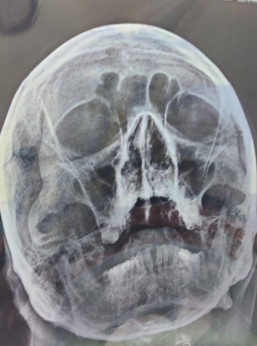 Again a cytological smear was obtained from the alveolar and palatal region, and Papanicolaou staining showing numerous aseptate fungal hyphae on a background of epithelial cells admixed with inflammatory cells was seen. The samples were also sent for direct microscopy and hyphae were observed after treatment with potassium hydroxide and staining with Gomori methamine-silver. On culture, the samples grew aseptate hyphae of Rhizopus and thus a diagnosis of post-COVID-19 maxillary and ethmoid MCR in an uncontrolled diabetic male was made. Considering the situation of the patient and diagnosis he was advised admission in the special MCR ward and a surgical debridement was planned, but the family and the patient refused any surgical intervention. As a result, this patient was treated medically. The patient was started on intravenous liposomal Amphotericin B therapy at 3mg/kg along with serial kidney function monitoring. Besides, the management of uncontrolled DM and anemia was done under the guidance of a diabetologist and hematologist. After two days the condition of the patient became critical as he developed severe chills, rigors, and severe electrolyte disturbance. Eventually, on the third day of admission, he succumbed to the opportunistic infection by MCR. Written informed consent was obtained from the next to kin of the patient for the use of case details and accompanying images.

MCR (phycomycosis, zygomycosis) is a rare opportunistic fungal infection that was first described by Paultauf in the year 1885.7 Following Candidiasis and Aspergillosis MCR is the most common angioinvasive fungal infection.8 MCR is commonly seen in immunocompromised patients however reports of MCR in healthy individuals are also available in the literature.9, 10 Indian literature over the past five decades shows that India has the highest load of MCR in the world with an estimated prevalence of 140 cases per million population.11

MCR are ubiquitous in the environment and are present in the soil, and they are typically isolated from decaying organic material.5 The fungi are often also found in indoor and outdoor air, in food stuff, and dust where it produce branched non-septate hyphae (5-25 μm) with a chitinous wall.12 The most common species are Rhizopus spp, Mucor spp, Rhizomucor spp, and Lichtheimia (formerly Absidia) spp.12 The patients get the infection either by inhalation of spores or by direct inoculation of conidia.12

The various contributing factors for MCR are uncontrolled DM (particularly in patients having ketoacidosis), malignancies such as lymphomas and leukemias, renal failure, organ transplant, long-term corticosteroid and immunosuppressive therapy, cirrhosis, burns, protein-energy malnutrition,   deferoxamine therapy, and acquired immune deficiency syndrome (AIDS).13 The recent rapid rise of cases of MCR in India could well be attributed to widespread over the counter use of corticosteroids for the management of COVID-19.14 During the recent second wave of COVID-19 in India, the unsupervised and superfluous use of corticosteroids and antibiotics disturbed the normal glucose and gut homeostasis thereby weakening the already debilitated cases of COVID-19 and thus predisposing them to opportunistic infections like MCR.14 Also, there are certain other factors that could be detrimental to the MCR infection like excessive use of zinc, iron, and aluminum leading to an overload of these minerals thus contributing to the growth of MCR.15, 16

Other potential contributors could be widespread and over the counter use of antibiotics (like Doxycycline, Azithromycin, Ivermectin, etc.); immunomodulators (like Tocilizumab with steroids); immune suppression by the B1.617 variant of COVID-19 virus; reuse of mask and cannulas; industrial oxygen use instead of medical oxygen in patients; use of tap water instead of distilled water in humidifiers; lack of hygiene in overwhelmed hospitals; use of unhygienic masks, ventilators, oxygen systems, humidifies, etc.17

The inhaled fungal spores spread to the paranasal sinuses and consequently to the orbit, meninges, and brain by direct extension. 10 Successful management of this fatal infection requires early identification of the disease and aggressive and prompt medical and surgical interventions to prevent the high morbidity and mortality associated with this disease process.10

The management of MCR involves a timely and aggressive approach. Four factors are important for treating MCR: rapidity of diagnosis, reversal of the underlying predisposing factors (if possible), appropriate surgical debridement of infected tissue, and appropriate antifungal therapy. 7 A high index of suspicion with judicious use of diagnostics, medicines, and surgeries could well be an answer to the growing problem of MCR in the COVID-19 pandemic.

UNCTAD. Impact of the COVID-19 pandemic on trade and development: transitioning to a new normal. Available from URL:- https://unctad.org/webflyer/impact-covid-19-pandemic-trade-and-development-transitioning-new-normal. Last accessed 2021 on May 26

S Pakrasi Black fungus declared as notified disease in these states. Available from URL:- https://www.hindustantimes.com/india-news/black-fungus-declared-as-notified-disease-in-these-states-101621930175465.html. Last accessed 2021 on May 26

CDC. Where Mucormycosis comes from. Available from URL:- https://www.cdc.gov/fungal/diseases/mucormycosis/causes.html#:~:text=Mucormycetes%2C%20the%20group%20of%20fungi,than%20in%20winter%20or%20spring. Last accessed 2021 on May 26

Doctors blame irrational steroid use for rising black fungus cases in Delhi. Available from URL:- https://www.businesstoday.in/current/economy-politics/doctors-blame-irrational-steroid-use-for-rising-black-fungus-cases-in-delhi/story/439408.html. Last accessed 2021 on May 26

Black fungus, white fungus, yellow fungus: What we know about post-Covid infections. Available from URL: https://www.hindustantimes.com/india-news/black-fungus-white-fungus-yellow-fungus-what-we-know-about-post-covid-infections-101622102847311.html. Last accessed 2021 on May 27