Background: Asthma is an inflammatory disorder, usually chronic, and is related to the hypersensitivity of the airways to allergens leading to dyspnoea, wheezing, cough and tightness in chest. Increased severity of asthma and poor control has been attributed to lower levels of Vitamin D levels.

Results: The serum eosinophil count, sputum eosinophil count and IgE levels were significantly higher in Vitamin D deficient patients compared to the sufficient patients. The most common severity of asthma among the patients was due to atopy as seen in 53.8% of the patients. In 39.6% of the patients who were Vit D deficient, the asthma was very severe as was the case in 8% of the Vit D sufficient people. The Forced expiratory volume, Forced vital capacity and FEV1/FVC1 was 92.69 ± 0.9 %, 91.3 ± 12.1% and 76.2 ± 8.7 in patients with deficient Vitamin D levels and 97.36 ± 1.1%, 99.1 ± 7.3% and 81.6 ± 13.1 in patients with sufficient Vit D levels respectively.

Conclusions: There seems to be a strong association of Vitamin D levels and asthma among patients. High vitamin D levels are beneficial to the lung function and also slow the asthma exacerbations.

Asthma is an inflammatory disorder, usually chronic, and is related to the hypersensitivity of the airways to allergens leading to dyspnoea, wheezing, cough and tightness in chest. It is commonly seen to occur at night or early in the morning. In severe cases, it may be a life-threatening condition.1 The cases of asthma have seen a rising prevalence globally, affecting 300 million people in the last few decades. This results in a huge financial burden on the human health care resources.2, 3 It is one of the very common conditions in children and one of the main causes of morbidity.4 Asthma and its presence may be influenced by genetic factors, environmental, socioeconomical and ethnic factors.5

The causes of asthma are unclear as the presentation is different in adults and children.6 Regulations of T helper cell cytokines, IL-4, IL-5, IL-13 in asthmatic patients is characterised by increased eosinophilia, increased IgE level and degranulation.6, 7

The major source of Vitamin D is sunlight, followed by diet. On exposure to the ultraviolet rays of the sun, the 7-dehydrocholesterol, which is present in the skin is converted to previtamin D3. This previtamin D3 ultimately becomes Vitamin D3. Vitamin D3, in the liver is transformed into 25-hydroxyvtamin D(25[OH]D3), which gets activated in the kidney.8 Activated Vitamin D3 is known to help in the regulation of the innate immune system and helps in the production of antimicrobial peptides. Then they act on macrophages, there is an increased phagocytosis and chemotaxis effect, which further improves the immune mechanism.9 However, due to alteration in the lifestyle and diet, which could include more time spent indoors and unhealthy fast foods, more and more cases of vitamin D deficiency are being reported.10, 11 A distinctive link between lower levels of Vitamin D and asthma attacks with adverse outcomes have also been reported.10, 11

There have been studies associating Vitamin D levels with asthma. Increased severity of asthma and poor control has been attributed to lower levels of Vitamin D levels. A study showed asthmatics to have a lowered lung function with more frequent exacerbations.14 Furthermore, Vitamin D helps in protecting the children against many diseases such as viral infections and asthma. 15, 16 Taken during pregnancy, vitamin D helps in enhancing the lung capacity and protects the new born against development of asthma later on in life.17 In non-allergic eosinophil inflammation, alarmin cytokines are regulated by Vitamin D. In case of severe asthma, where the patients are resistant to steroids and pathological interleukin (IL-17), Vitamin D3 helps in the uptake of steroids. Too much intake of vitamin D may also be deleterious.17

This study was therefore done to identify and assess the effect of lung function and its association with Vitamin D levels in asthmatic patients.

This study was done by the Department of Pulmonary Medicine at Kamineni Academy of Medical Sciences and research centre. 78 patients who were diagnosed with asthma during 14 months in between July 2018 to august 2019. This study was cleared by the institutional ethical committee and then the study was explained to the patients and an informed consent was taken from all of them.

Patients with hospitalization in the past one month, those who received immunosuppressants or steroids, other drugs such as bisphosphonates, phenytoin, sulfasalazine, omega 3 fatty acids, were excluded from the present study. Patients who had taken Vitamin D supplements were also excluded from the study.

All the patients were subjected to complete physical and clinical examination. Blood was collected from cubital vein and tested for complete blood picture, blood eosinophil count random blood sugar, cholesterol levels, both total and HDL, Triglycerides, and 25(OH)D levels. Sputum eosinophil count was done after sputum collected and staining with Leishman stain.

Spirometry was done on all the patients before and 10 – 15 mins after the use of inhaled salbutamol as a bronchodilator. Forced expiratory volume, Forced vital capacity were observed and FEV1/FVC ratio was calculated. Use of bronchodilators for the next 6 hours and use of theophylline for 24 hours was dissuaded. Statistical analysis was done using student t test and bar and pie charts. Asthma Control Test was done for all the patients using the standard questionnaire and the results were obtained on a sale of 5 to 25. 18

Number of males and females 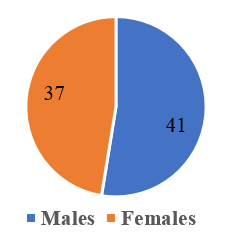 Differentiation of patients based on age 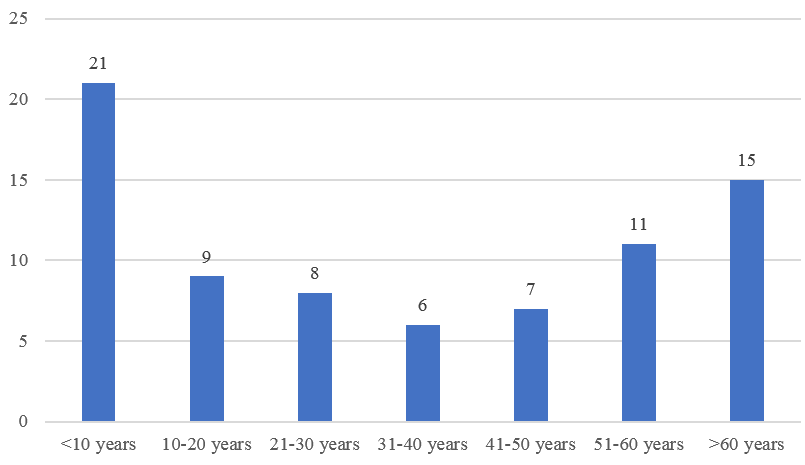 53 (67.9%) of the asthmatics in our study were vitamin D deficient, with values <10mg/mL, while 21 (26.9%) were intermediate with values between 10-30 ng/mL. Only 4 patients (5.1%) had a normal value of >30ng/mL of Vitamin D values. The most common months during which asthmatic attacks were seen in these patients were in the months between Oct and Dec, when the weather was very cold or raining, followed by Jan to March, when the weather was cold, but slowly becoming warmer. During the summer months of April to June, the incidences of asthma was the least. (Table 2)

Incidence of URTI during seasons in asthmatics 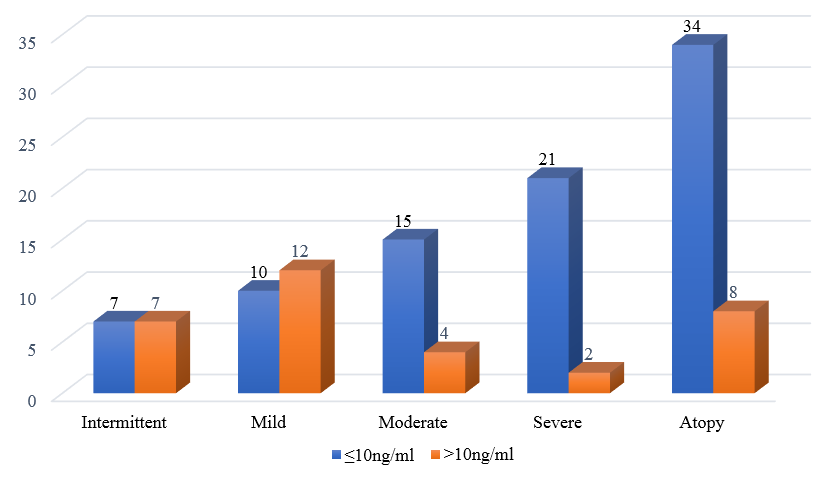 Asthma had become one of the most common diseases with a worldwide prevalence, with a very large economic burden. As there is a probable positive association between vitamin D and asthma, it has become one of the major topics of interest.

In the present study, 52% were males and 48% were females. In a study by Andujar-Espinosa et al, majority of the patients (78%) were women.19 The most common age group to be affected is the paediatric age group followed by the elderly.

The FEV1%, FVC1% and FEV1/FVC% in the present study was 92.69 ± 0.9, 91.3 ± 12.1, 76.2 ± 8.7 among patients with Vitamin D levels ≤10ng/ml which was significantly lower than those with > 10ng/ml levels which were 97.36 ± 1.1, 99.1 ± 7.3 and 81.6 ± 13.1 in those above 10ng/ml respectively. In a similar study by Liu et al, it was observed that patients with low vitamin D levels had a lowered FEV1%. They also found a positive association between the FEV1% and vitamin D levels.14 FEV1% also showed improvement in a study by Arshi et al after Vitamin D supplementation in Asthma patients.28 Similar results were observed in a study by De Groot et al and Yadav and Mittal.29, 30 However, Castro et al did not find any association between the Vitamin D levels and asthma.31 Alyasin et al., also found a significant relationship between the Vitamin D levels and predicted FEV1 and predicted FEV1/FVC values.32

There was a significantly higher levels of Serum eosinophil count and sputum eosinophil count among the patients with deficient levels of Vitamin D. The Serum IgE levels were also significantly higher in the asthmatic patients. Guru et al, in a similar study reported a higher level of eosinophils in the asthmatic patients in the Vitamin D deficient patients.33 Higher IgE and eosinophil levels were also observed by Brehm et al in their study.24 However a study by Hypponen et al., found a nonlinear association between the two.34

There seems to be a strong association of Vitamin D levels and asthma among patients. High vitamin D levels are beneficial to the lung function and also slow the asthma exacerbations. Therefore, Vitamin D supplementation among patients with asthma can help in its management. However, since our sample size is small, more studies need to be done to corroborate these findings and estimate the cut off for the optimal dose of Vitamin D to be given to asthmatic patients.