Ravindranath and Raju: Hyperuricemia in patients with pulmonary hypertension: A study in a tertiary care center

Hyperuricemia in patients with pulmonary hypertension: A study in a tertiary care center

Background: Pulmonary Hypertension is one of a life-threatening disease with high rate of patient mortality. Decreased cardiac output and tissue hypoxia is measured using Uric acid as a marker for assessment of pulmonary hypertension.

Results: The serum uric acid levels among the patients were 8.3±1.4mg/dL, creatinine levels were 2.1 ± 0.5 mg/dL, and the total bilirubin levels were 1.9 ± 0.8 mg/dL all of which was significantly higher than the controls. The uric acid levels were also positively correlated to the NHYA class. The blood pressure and the pulmonary arterial pressure were also higher than that of the controls. The correlation was done between the elevated uric acid and ejection fractions and the correlation coefficients of MPAP, LVEF, RVEF and the NYHA class were all significantly associated and the values were 0.394, -0.513, -0.467 and 0.38 respectively.

Pulmonary Hypertension is one of a life-threatening disease with high rate of patient mortality. It is estimated that the approximate survival rate of the patient is 2.8 years.1, 2 It is not just a single disorder but consists of a group of disorders due to proliferative and obstructive pulmonary vessels remodeling which result in pulmonary arterial pressure and vascular resistance ultimately causing heart failure and death.3, 4 It is defined as a resting mean pulmonary arterial pressure which is higher than 25 mmHg and is measured by right heart catheterization, which is considered to be the gold standard for the diagnosis of PH.5, 6 PH can be seen at all ages – from infancy to elderly.6 It is progressive and if untreated, it is a singular cause for death. However, since the symptoms are nonspecific, it is difficult to identify the condition.

Diagnosis of pulmonary hypotension is a challenge for the clinicians as the signs and symptoms are nonspecific and difficult to recognize. Most of the time, PH is due to an underlying condition and therefore, the symptoms of the PH are obscured with those of the underlying disease. Specific diagnosis is done for PH only when it is suspected, to check its presence and severity and cause. But at times, the ECG also may not suggest PH, making the diagnosis difficult and the clinician has to rely only on the clinical suspicion. The need for Right heart catheterization is required only when the PH is high, otherwise, in lower PH, other alternatives methods of treatment can be done.7

Decreased cardiac output and tissue hypoxia is measured using Uric acid as a marker for assessment of pulmonary hypertension.6 Uric is found to be elevated even in diseases such as chronic heart disease, chronic obstructive lung disease and cyanotic congenital heart disease.8, 9, 10 Increased levels of uric acid has been observed in left or right heart failure.11 The test for uric acid estimation is simple and noninvasive, therefore it is one of the preferred methods.

Uric acid, being the final product of purine degradation is elevated when there is an over production of uric acid such as in myelo and lymphoproliferative diseases or during decreased excretion as in renal insufficiency and as a part of metabolic syndrome like in insulin resistance.12 The mechanism of impaired oxidative mechanism in these diseases is due to depletion of adenosine triphosphate by tissue ischemia and hypoxia, and also the promotion is degradation of the adenosine nucleotides into inosine, xanthine, hypoxanthine and Uric acid.13, 14

This prospective study was done by the department of Pulmonary medicine Kamineni Institute of Medical Sciences and Research Centre, and Maheswara Medical College over a period of 18 months i.e., March 2019 to Jully 2020 after getting the Institutional Ethical Clearance. 75 patients who were diagnosed with a mean pulmonary arterial pressure of >22mmHg were included into the study and categorized as group A. 75 healthy patients without pulmonary hypertension were also included into the study as controlled and assigned into Group B. Patients with renal dysfunction, hepatic diseases, pulmonary diseases, interstitial lung disease, hepatic diseases, congenital cardiac abnormalities and Diabetes mellitus were excluded from the study.

The nature of the study was explained in detail to the patients and controls and their relatives and informed consent was taken from all of them. A thorough demographic details were taken from all of them and they were all subjected to physical and clinical examination. ECG, chest X-rays (Posterio-anterior view), pulmonary function test, ventilation or perfusion scintigraphy was also done for all of them.

The level of clinical impairment was classified according to the New York Heart Association (NYHA) into Class I-IV (Table 1).

For Uric Acid analysis, blood was collected by from medial cubital vein into vacutainers without anticoagulants so as to get serum and was transported to the Central lab for estimation. This Estimation of blood glucose level, creatinine, lipid profile was also done.

Statistical analysis was done using SPSS version 13.0 software and the data was expressed as mean ± SD. The comparison was analyzed using Pearson’s correlation coefficient with p<0.05 considered to be significant. 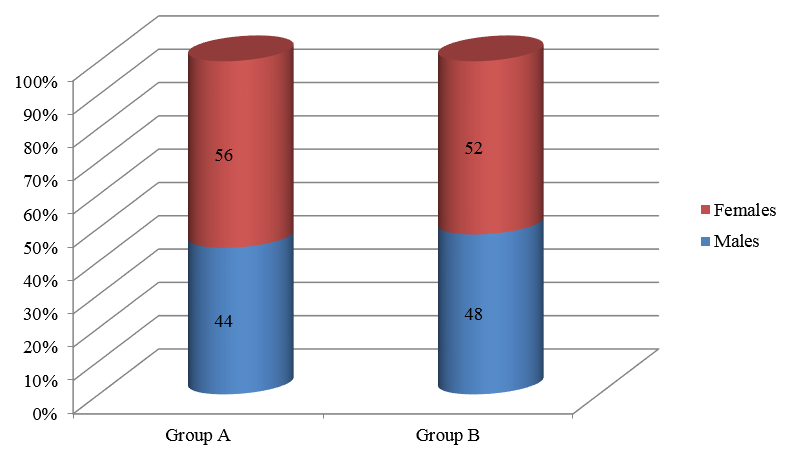 The predominant NYHA classification to which the patients belonged to were Class II, with 28 patients (56%), followed by Class III with 19 (38%) patients and 3(6%) belonged to Class IV (Figure 2). 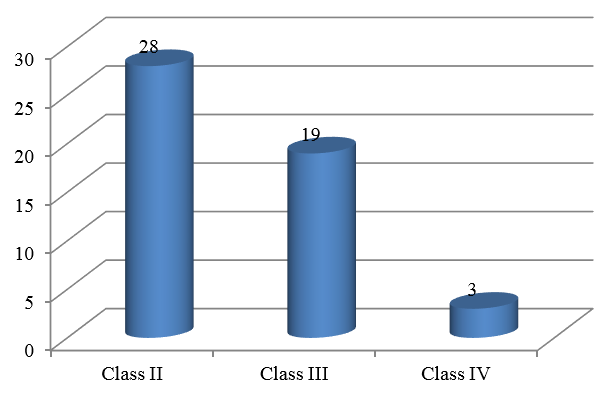 Uricacid levels among controls and cases

The correlation was done between the elevated uric acid and ejection fractions and the correlation coefficients of MPAP, LVEF, RVEF and the NYHA class were all significantly associated and the values were 0.394, -0.513, -0.467 and 0.38 respectively (Table 4)

The mechanism of the higher uric acid levels in patients with heart failure is not yet clear. As Uric acid is one of the final by product of purine metabolism, impairment of adenosine triphosphate (ATP) production occurs due to hypoxia, resulting in the degradation of ATP to diphosphate (ADP) and monophosphate (AMP). This further results in the increase in purine metabolite and thereby increase in uric acid levels.15

The high levels of uric acid were positively correlated with the MPAP and NYHA class, while they were negatively correlated to the RVEF and LVEF. RV dysfunction, Pulmonary artery systolic pressure and the WHO functional class was significantly related to the high uric acid levels in another study by Seyyedi et al.16 A positive correlation of the mean right arterial pressure was seen in the patients with high uric acid levels in a study by Voelkel et al22 and Zhang et al.18

The authors declare that there are no conflicts of interest in this paper.