Air leak syndrome manifesting as pneumomediastinum (PM), pneumothorax (PNX) or subcutaneous emphysema (SCE) has been reported in COVID-19 patients with increasing frequency and with varying outcomes. We report a series of eight cases of PM or SCE from 1st April to May 31st, 2021, among COVID-19 patients admitted in our ICU. All the patients had severe hypoxemia (PaO2/FiO2 ratio ≤100) and were on noninvasive ventilation when the air leak was detected except one. PM/SCE was observed mostly on the 3rd to 5th day after instituting positive pressure ventilation. High respiratory drive with mean tidal volumes in the range of 6 to 10ml/kg predicted body weight was observed in these patients. Mean inspiratory pressure (Pressure support + positive end expiratory pressure) and mean positive end expiratory pressure delivered by the ventilator ranged between 11 to 21 and 5 to 12 cm H2O respectively. Outcomes varied with four deaths, four patients requiring intubation, two patients requiring chest drainage and four patients showing overall improvement out of the total eight patients with air leak.

Key Messages: 1. Air leak syndrome is not rare in COVID-19 with reported incidence of 10-14%; 2. Spontaneous noninvasive ventilation in patients with high respiratory drive and large fluctuations in tidal volumes seems to be a risk factor for air leak in patients with severe lung involvement; 3. A conservative approach without intercostal drainage seems to be acceptable in the absence of pneumothorax; 4. Prognosis is varied depending on the underlying disease and not always catastrophic.

Air leak syndrome manifesting as pneumomediastinum (PM), pneumothorax (PNX) or subcutaneous emphysema (SCE) has been reported in ARDS patients as a complication of mechanical ventilation. PM is the accumulation of air in the mediastinum and may progress to PNX. Viral pneumonias like H1N1 and SARS CoV1 outbreak were associated with reports of pneumothorax.1, 2 Ever since the COVID-19 pandemic erupted, the disease pattern and epidemiology have been evolving rapidly. As compared to the onset of the pandemic in 2020, the second wave of COVID-19 infection in India which started in March 2021 has affected a larger section of the population with a higher infection rate and mortality. We present a case series of eight critically ill COVID-19 patients with PM or SCE admitted in our intensive care unit (ICU) during this period. While most of the published reports of air leak involve intubated patients, nearly all the patients in our series were on noninvasive ventilation (NIV). In this report, we have documented the respiratory parameters which can contribute to lung injury in spontaneous mode NIV.

A total of eight patients developed SCE or PM from 1st April to May 31st, 2021, out of 96 COVID-19 patients admitted with severe hypoxemia in the ICU. Out of the 96, 39 patients were intubated. All the patients who developed PM/SCE except one were on NIV with pressure support (PS). Three out of these eight patients had PNX as well. Male to female ratio was equal. Identifiable risk factors for PM/SCE /PNX like cough, smoking and underlying lung comorbidities were looked into. A few patients had history of cough at the disease onset. Three female patients who had history of asthma, did not show any features of exacerbation during their hospitalization. None of them were smokers. Uniformly, all of them had severe hypoxemia with radiology suggestive of severe covid pneumonia and were on dexamethasone 6mg per day. PM/SCE was mostly observed on the 3rd to 5th day after instituting positive pressure ventilation (PPV). Table 1

Four patients had to be intubated after developing PM, PNX and SCE on NIV. Two out of the three patients who had PNX along with PM required intercostal drain (ICD).

Patient presented with fever, cough and dyspnea of three days duration. She was admitted in the ICU and was given NIV support for desaturation and tachypnoea. She developed worsening desaturation and SCE on the 3rd day of NIV on PS mode. Chest CT scan showed PM and a small PNX along with SCE. She was intubated but no ICD was placed. Subsequent chest X-rays did not show worsening of PM or PNX and clinical examination showed improvement of SCE. Figure 1 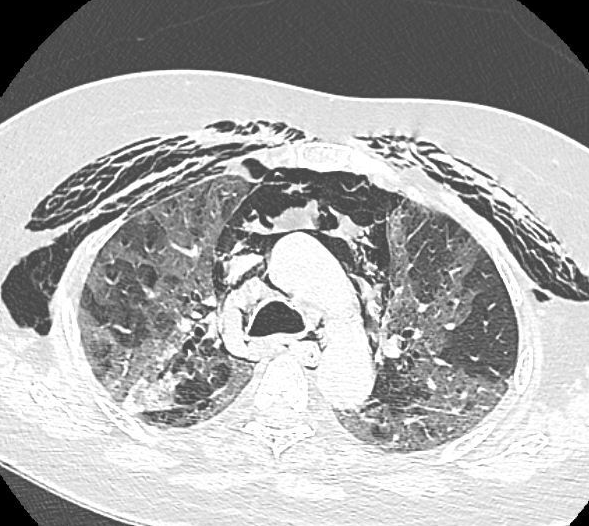 Patient showed PM, SCE and PNX in the CT scan on the 5th day of NIV. He deteriorated clinically which required ICD placement along with invasive and prone ventilation. In the subsequent days, although his SCE improved, his ARDS did not show any improvement.

Patient developed PM and SCE on the 5th day of NIV and was intubated. Her air leak subsided without ICD.

All these three patients had severe ARDS warranting prone ventilation. They, subsequently, developed multiple organ dysfunction syndrome and died despite all supportive measures.

Patient had history of multiple myeloma and was on immunosuppressants when he contracted COVID-19. He developed PM and SCE on NIV which rapidly progressed to PNX within a few hours requiring intubation and ICD insertion. He developed refractory shock and died within 24 hours after developing the air leak. Figure 2 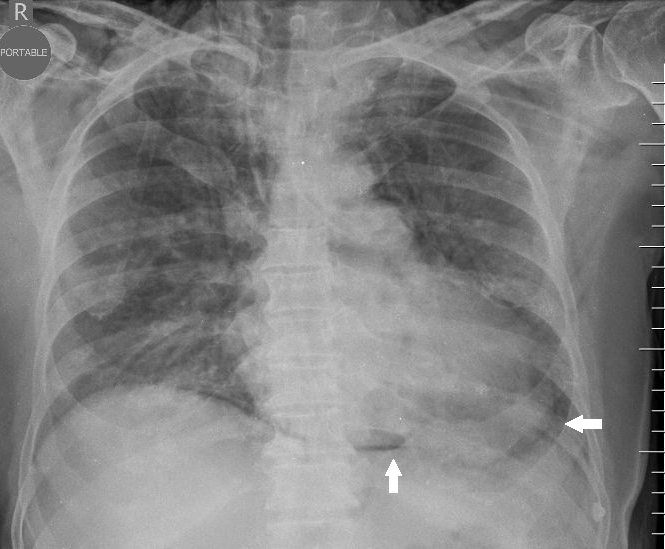 Two patients developed PM and SCE on the 4th day and one developed SCE without CXR feature of PM or PNX on the 7th day, while on NIV. NIV was changed to high flow nasal cannula (HFNC) or venturi mask (VM) and they subsequently improved without the need for ICD. For one of these patients, who required continued NIV support, the pressure support was reduced to the minimum. Figure 3, Figure 4 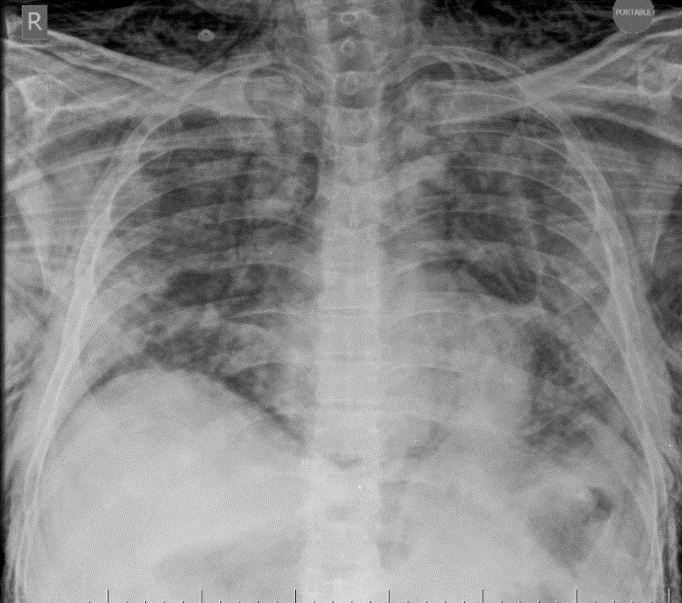 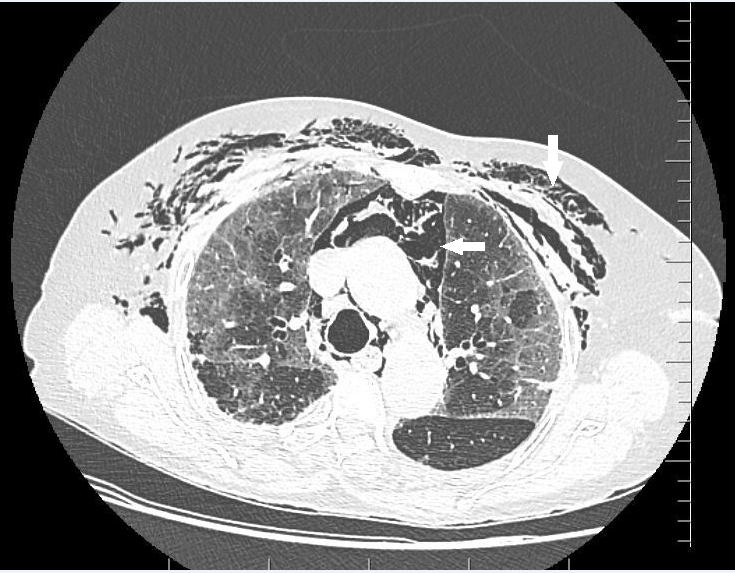 Patient was initiated on NIV for desaturation and later intubated for worsening hepatic encephalopathy. On invasive mechanical ventilation, he was on spontaneous pressure support mode after the initial 24 hrs. He developed PM and SCE on the 4th day of invasive ventilation but was successfully extubated to VM on the same day without ICD.

In general, patients who developed PM/SCE without PNX were managed conservatively without ICD and avoidance of further exposure to positive pressure ventilation (PPV).

Respiratory mechanics on the days preceding the development of PM/SCE were analyzed from the charts retrospectively. It was observed that a mean positive end expiratory pressure (PEEP) between 5 to 12 cm H2O was instituted for severe hypoxemia (PaO2/FiO2 ratio ≤100). Mean inspiratory pressure (PS+PEEP) delivered was between 11 to 21cm H2O. Mean tidal volume was between 6 to 10ml/kg predicted body weight. High respiratory drive on spontaneous mode NIV with high respiratory rates (RR) and large swings in tidal volumes was observed in all the patients.

PM may be caused by various reasons like major airway, lung or esophageal injury or mediastinal infections. Barotrauma and lung comorbidities may result in PM or PNX in patients on positive pressure ventilation. However, it has been observed that the incidence of these complications was much higher in COVID-19 patients than seen conventionally in ARDS patients.3 A comprehensive literature review revealed several reports of PM, SCE or PNX in COVID-19 infected patients with and without exposure to PPV. 4 A descriptive analysis of 346 COVID-19 intubated ARDS patients showed a 10% incidence of PM which was more than historical patients with ARDS.5 PM subsequently progressed to PNX with 40% requiring ICD. Another case control study compared the incidence of PM/SCE in ARDS with and without COVID-19 infection.6 13.6% (23/169) of COVID-19 patients developed PM/SCE despite lung protective ventilation strategies compared to 1.9% in the other group. This was attributed to lung frailty rather than barotrauma in the group. Many of the published cases had no identifiable risk factors for PM/SCE/PNX like smoking, lung comorbidities or cough.

The incidence of PM/SCE in our ICU over the two-month period was 8.8%. Severe lung involvement in this group as suggested by the PaO2 /FiO2 ratios and radiology supports the notion of increased frailty and pathological changes like cystic spaces in SARS CoV2 infected lungs leading to PNX/PM/SCE.7, 8 Despite a significant number of intubated patients in the cohort (42/96), almost all patients who developed the air leak were on noninvasive spontaneous ventilation. A high respiratory drive and minute ventilation were observed in this group. This makes a case for spontaneous ventilation causing self-induced lung injury (P-SILI) as a plausible explanation for the air leak.9, 10 It has been postulated that the large swings in pressure during spontaneous ventilation can result in high tidal volumes and significant trauma to an already frail lung. Positive pressure would have added insult to this by further increasing the driving pressure. This concept is supported by other studies with similar pattern of development of air leak predominantly in patients on NIV than on invasive mechanical ventilation.4

This case series is unique in that the ventilatory settings and the patient’s respiratory mechanics in terms of high RR and tidal volumes seems to have a causal association on the lung injury seen in the cohort. We hypothesize that spontaneous ventilation (noninvasive or invasive pressure support mode) in a frail lung with a high respiratory drive caused more barotrauma than invasive mechanical ventilation with deep sedation and lung protected ventilation.4 Alike many reports published in the last year, we also noticed an unprecedented spike in the incidence of PM and SCE among critically ill COVID-19 pneumonia patients. Interestingly, there were no such cases from our ICU during the first wave of COVID-19 in 2020. It is difficult to conclude whether the higher incidence noted in the second wave of COVID-19 is merely the reflection of larger and more severely infected population or whether it suggests altering disease characteristic of the mutating virus. Another point to note is that, in the published literature, different case reports have different outcomes attributed to the air leak syndrome, ranging from good to catastrophic.3, 4, 6 In our case series, four out of eight patients had a good prognosis despite one patient being continued on NIV.

Our case series suggests that COVID-19 patients on spontaneous mode NIV with high respiratory drive are prone to air leak. Avoidance of positive pressure may be advantageous albeit, practically difficult. Air leak in COVID-19 patients may have varied outcomes depending on the underlying disease and is not necessarily catastrophic. A conservative approach to PM or SCE with close monitoring for PNX may be appropriate.

A Aiolfi T Biraghi A Montisci Management of Persistent Pneumothorax With Thoracoscopy and Bleb Resection in COVID-19 PatientsAnn Thorac Surg20201105413510.1016/j.athoracsur.2020.04.011