The article presents a 22 year old female being treated as a case of asthma without any benefit, whom was ultimately found to have an endobronchial growth which on biopsy revealed Granular Cell Tumor. Pulmonary Granular Cell Tumors are very rare benign tumors as less than 80 cases has been described since 1938, when it was first described.

A 22 year old female, student by occupation was admitted to Dept. of Pulmonary Medicine, with the history of dry cough and wheezing for nearly 8 months. She neither had any family history of asthma, nor any history of atopy. She was being treated outside as a case of asthma, with inhaled corticosteroids and beta 2 agonist, but without any benefit. However, post admission on examination it was found that she had fixed monophonic wheeze only on left side with normal auscultatory findings on right side of the chest.

CT Thorax revealed hyperinflation and hyperlucency (Figure 1 b) of left lung with intraluminal space occupying lesion in left main bronchus (Figure 1a), suggestive of endobronchial lesion causing partial obstruction. Hence fibreoptic bronchoscopy (Figure 1c) was planned which revealed a growth in left main bronchus 4cm distal to carina and the scope couldn’t be negotiated beyond this point, biopsy was taken from the growth.

Biopsy from the left main bronchus revealed partially squamous epithelia lined tissue with a submucosal tumor mass composed of large round to oval appearing cells having plenty of eosinophilic granular cytoplasm and nuclei which is small and round with bland chromatin, arranged in sheets. Nuclear pleomorphism and necrosis was absent and the mitosis was sparse (Figure 1d). The Immunohistochemistry revealed that the tumor cells were diffusely positive to S-100 and focally positive to calretinin, and the tumor cells were negative for cytokeratin, chromogranin A and CD1a. All the features were consistent with granular cell tumor.

After confirmation of the histopathological diagnosis of the left endobronchial mass, she underwent rigid bronchoscopy and debulking (Figure 2a) using argon plasma coagulation and patency of the left main bronchus was achieved (Figure 1b).

Follow up CT scan chest with virtual bronchoscopy (Figure 1c) done after 6 months revealed residual tumor with wall thickening and irregularity at posterior wall of left main bronchus (extension outside bronchial wall 1.1 x 0.9cm) with no significant narrowing of bronchus yet. She has been advised for follow up at every 3 months interval and has been planned to evaluate for restenosis at every visit and to take step accordingly. 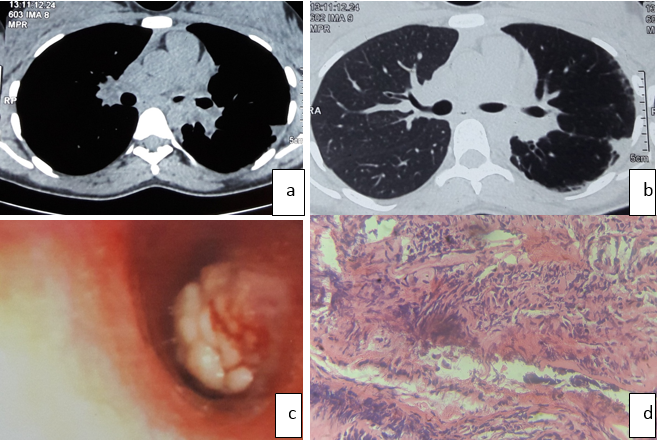 Endobronchial Granular Cell Tumors (EGCTs) are benign tumors of the lung that are very rare. Skin and subcutaneous tissue are the common site for Granular cell tumor, lung is a remote site with only 6-10% occurrence in lungs.1 Pulmonary GCTs are so rare that literature reports only 80 cases till date since 1938.2 It usually occurs in middle-aged individuals.3 It can occur equally in both sexes. EGCTs has been noted among African Americans at a higher propensity than other ethnicity.4 Among inducing factors smoking may be a factor although there is no proven causal association.5

Tongue, lips and lower extremities muscles were the site from where GCTs were initially reported hence Abrikossoff A believed that skeletal muscles were the source of origin for GCTs.6 ‘Granular cell myoblastoma’ was the name given to GCT’s. However, Schwann Cells (neural cell) now believed to be the origin of GCT’s based of electron microscope studies along with results of cytochemical studies.7 EGCT is characterized by submucosal infiltration by round to oval tumor cells that are rich with granular eosinophilic cytoplasm. Peribronchial tissue are often infiltrated by these tumor cells. Subepithelial thickening of basement membrane along with overlying epithelium undergoing squamous metaplasia can be observed.8 These cells stains positive with antibodies to vimentin, S-100, actin, neuron specific enolase suggestive of origin from neural cells.

Size of EGCT’s from subcentimetric to more than 10 cm, and the symptoms are variable and often size dependent. It may produce cough and haemoptysis if infiltrates locally. Bronchial obstruction can be produced by bigger tumors, obstruction in turn can lead to chest pain, dyspnoea and recurrent infection. GCT’s are usually benign and so far only one malignant case has been reported.9 Bronchoscopy findings includes polyps with essentially normal mucosa or isolated nodules that appears small and firm. Obstructive cases with parenchymal destruction can require pneumonectomy. Usually these tumors can be managed endoscopically.

All that wheezes is not asthma, especially unilateral fixed monophonic rhonchi is very suggestive of endobronchial obstruction requiring evaluation. Endobronchial granular cell tumors are very rare pulmonary tumors which are now believed to originate from Schwann Cells. They vary in size during presentation and the symptoms are dependent of the tumor size. Endoscopic removal of the tumor remains the main modality of management.