A 73 years old male, known hypertensive on medication, with the history of SARS-CoV-2 infection nine months ago, presented to us with mucormycosis, he was treated with Liposomal amphotericin B initially. He developed acute kidney injury with recurrent pulmonary oedema requiring ICU admission and Haemodialysis. He later developed catheter related blood stream infection that grew Carbapenem resistant Klebsiella pneumonia and was started on Polymyxin B. However from day 3 of antibiotics he started to develop recurrent respiratory arrest with no apparent cause. He required a brief period of mechanical ventilation and was successfully weaned. He had recurrent such episodes with no apparent cause. After extensive work up and literature search it was diagnosed as Polymyxin B induced respiratory failure. Polymyxins were stopped, patient was discharged in a stable condition after five days of further observation and is currently on follow up with no such episode of dyspnoea.

The Polymyxin group of antibiotics were introduced in the 1950’s and were introduced into clinical medicine without the rigors of modern-day drug regulatory trials. Significant neurological and renal toxicity and advent of newer antibiotics pushed these drugs out of our therapeutic armamentarium. However, with increasing infection with multidrug-resistant organisms (MDRO) especially Carbapenemase producing Enterobacterales (CRE) and Carbapenem resistant Acinetobacter baumanii (CRAB) across the world, there has been a surge in the use of Polymyxins to treat such infections over the last decade or so.1 A reduction in rate of nephrotoxicity with Polymyxins have been noted with its use over the last two decades. However, rates of neurotoxicity have not been well reported during this era of resurgence inPolymyxin use. 2 Herein, we report an extremely rare occurrence of respiratory arrest following Polymyxin B administration.

73 years old male with history of hypertension and COVID-19 infection (nine months ago) was admitted to the hospital for chronic sinusitis and underwent a right maxillectomy. Histopathological examination of tissue from right maxillary sinus revealed chronic inflammation with aseptate hyphae consistent with mucormycosis. There was no orbital or cerebral involvement noted on preoperative evaluation and his baseline creatinine was 1.3mg/dl. He was initiated on Liposomal Amphotericin B intravenously at 3mg/kg dose. He had severe infusion related rigors with the first three doses of the drug. On day four of infusion patient developed severe shortness of breath, chest discomfort and hypertension necessitating transfer to intensive care unit (ICU). Patient was noted to be in severe respiratory distress, unable to lie flat. Initial ECG obtained showed sinus tachycardia (Figure 1) Vitals parameters of the patient are listed in Table 1.

A diagnosis of acute pulmonary oedema, Hypertensive crisis, Acute Kidney injury (AKI) was made and patient initiated on diuretics and non-invasive ventilation. He responded well initially but continued to have oxygen requirements and increasing creatinine levels necessitating initiation of haemodialysis (HD) on day seven. His post hemodialysis Xray is shown in Figure 2. He developed new fever and SOB on day seven of ICU admission. HD Line related sepsis was diagnosed and blood cultures revealed CRE Klebsiella on day 13 admission. Klebsiella was sensitive only to Polymyxins.

At time of initiation of Polymyxin B therapy patient had stable vitals, no oxygen requirements and was able to lie flat.

On the third day of therapy with Polymyxin B infusion, patient developed sudden respiratory arrest. He became acutely unresponsive, bradypnoeic (RR of 8-10/min) with rapidly declining saturation to 30% followed by bradycardia with HR of 30/min. Patient was emergently intubated and ventilated with immediate restoration of vital signs. Over the next 30 minutes patient regained consciousness and was extubated to BiPAP. Over next few hours he was weaned off oxygen to room air. Investigation to this episode included a coronary angiogram, pulmonary angiogram and renal angiogram, all of which were normal. Neurological evaluation for seizures and myasthenia were negative. There was no evidence of pulmonary oedema clinically and radiologically. The only treatment given following this acute episode was ventilation for six hours, initially invasively and then non-invasively.

Over the next four days patient condition improved overall and on day seven of Polymyxin B therapy he had another episode of respiratory arrest with acute unresponsiveness, bradypnoea, desaturation to 10% spo2 and bradycardia of 30/min. An ABG during this episode prior to intubation revealed. He was again emergently intubated and ventilated with immediate restoration of vital signs. Bronchoscopy, cranial MRI, chest X-ray, echocardiogram, electrocardiogram, and laboratory tests excluded pulmonary embolism, pneumothorax, airway congestion, electrolyte disturbance, and nervous system disease such as stroke and epilepsy.

After both the episodes, the patient on enquiry revealed that at the time of the crisis, he had acute breathing problems, couldn’t breathe and speak and all this happened within 1-2 minutes.

A multidisciplinary board was formed to evaluate these episodes all the drugs that the patient took before respiratory distress. PMB was absolutely determined to be the cause of respiratory distress given that it is adrug that can induce neuromuscular blockade. Discontinuation of only Polymyxin B led to a rapid resolution and subsequently there have been no episode of respiratory arrest/failure and patient is discharged home after 7 days of observation with follow up for a resolving non-oliguric AKI. A written consent was taken from the patient for using his clinical data and investigations on his follow up visit.

Clinical and laboratory data during episodes 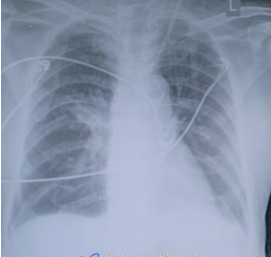 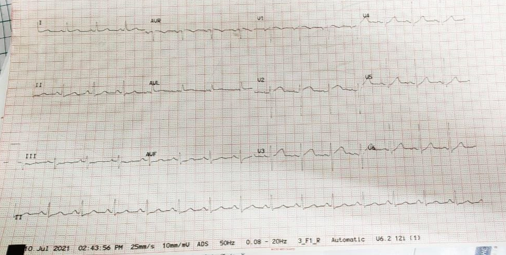 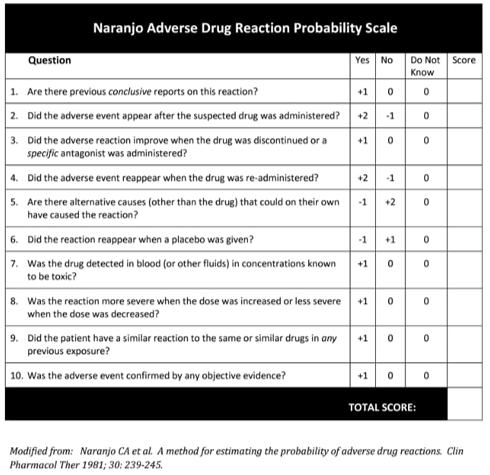 With the increasing burden of carbapenem resistant organism causing sepsis in the ICU, there has been a concomitant increase in the usage of Polymyxins.3 Polymxyins have become the drug of choice for infections due to Carbapenemase producing organisms at various sites in sepsis.

Respiratory arrest following respiratory muscle paralysis is a rare but potentially fatal complication of the use of Polymyxin. 4 Our patient experienced sudden respiratory arrest twice, which required intubation and mechanical ventilation after Polymyxin B infusions, which was consistent with the neurotoxicity of Polymyxin B. The Naranjo Adverse Drug Reaction Probability Scale score in our patient was 9 (Figure 3), which indicated a definite relationship between the administration of PMB and respiratory arrest. The case is limited with the unavailability of arterial blood gas prior to the first event as he was emergently intubated on presentation, however the second episode clearly shows a type-2 respiratory failure.

The most common side effects of the Polymyxins are seen in the renal and neurological systems.5, 6 Neurological side effects mainly include dizziness, weakness, facial and peripheral paraesthesia, vertigo, visual disturbances, confusion, ataxia and neuromuscular blockade, which can lead to respiratory failure or respiratory arrest. The incidence of neurotoxicity is about 7% in earlier literature with paraesthesia’s being the main toxicity. 7 Acute respiratory failure due to a neuromuscular blockade is very rare and there are only about 34 cases reported so far. The proposed mechanism is a non-competitive presynaptic blockade of acetylcholine release at the neuromuscular junction. Majority of these cases have been reported before 1970s, in the last 10 years, 3 cases have been reported. 8

The risk factors for neuromuscular failure and respiratory arrest with Polymyxin use is the presence of renal failure. 9 In previous studies, majority of the patients had renal failure. Concomitant drug therapy also is a major risk factor for Polymyxin related neuromuscular failure. 10 In previous case reports, use of other neurotoxic drugs like aminoglycosides, anaesthetic agents and corticosteroids have been implicated.

The risk of neurotoxicity is not dose dependent or directly linked to any time window following administration. 11 Complications can happen after one dose or even after 45 days. Nearly all cases are reversible, and they resolve over a few hours to a few days. In our case, both episodes resolved within six hours.

Since more and more cases of acute neuromuscular blockades are being reported and with increasing prevalence of CRE infections there needs to be more clarity about the utilization of Polymyxins, their dosing in renal failure and therapeutic drug monitoring. Antibiotic stewardship and use of Novel BL-BLI agents to treat CRE, especially in renal failure may be an option to prevent such near fatal cases.

The authors declare no conflict of interest.