Kumar T, Manjunath H K, and Arjun A S: Burkholderia cepacia: An unusual cause of pneumonia

Burkholderia cepacia: An unusual cause of pneumonia

Introduction: Burkholderia Cepacia is a gram negative organism, an uncommon cause of pneumonia. When isolated, it usually represents colonisation. In the presence of immunocompromising conditions, it can cause disease, ranging from mild illness to the highly fatal Cepacia syndrome. The organism is intrinsically resistant to many antibiotics.

Case Presentation: We report a 57 years old male farmer, who has diabetes mellitus and bronchial asthma, who presented with a acute history of high grade fever, pain abdomen and cough. He was diagnosed with a ruptured liver abscess, with the infection spreading to the right lower lobe. Laparotomy was performed. Pus culture grew Pseudomonas aeruginosa. He improved upon antibiotic therapy, only to return after one month with severe cough, chest X-ray revealing a lung abscess in the right lower lobe. Bronchoalveolar lavage culture grew Burkholderia cepacia, and sensitive antibiotics were initiated, however the patient succumbed to the illness. The implicated source of the organism was the nebulisation solution which he was using regularly.

Conclusions: Emphasis should be laid on the need for improved aseptic practices while using medical solutions at either hospital or home setting. An index of suspicion may guide optimal antibiotic prescription practices in susceptible individuals.

Burkholderia cepacia (B. cepacia) is a gram-negative organism and a less frequent cause of pneumonia. They carry intrinsic resistance to many antibiotics which makes them potentially lethal. They have been linked to poor outcomes in patients with structural lung disease [eg; cystic fibrosis] and in immunosuppressed individuals. They also cause the potentially fatal Cepacia syndrome, a combination of necrotizing pneumonia, rapid respiratory decline, and bacteremia. It primarily being a colonizer runs an indolent course in the majority, the immunosuppressed are susceptible to a wide range of manifestations.1, 2, 3, 4, 5 Knowledge of the existence of this entity with intrinsic resistance is vital to ensure optimal care. We hereby report a case of pneumonia caused by B. cepacia.

A 57-year-old male farmer, a known asthmatic, diabetic and hypertensive, presented with complaints of fever with chills and rigors for 15 days, cough for seven days and pain abdomen for five days. On physical examination he was hyperventilating, tachycardic and guarding the right upper abdomen. He was febrile, had a heart rate of 116/min, SpO2 of 96% in room air, blood pressure 130/90 mmHg and respiratory rate of 30 cycles/min. On systemic examination, he had severe tenderness in the right hypochondrium. Bowel sounds were normal. Examination of respiratory system and other systems were within normal limits.

He was initiated on broad spectrum antibiotics after sending blood and urine for cultures which had revealed no growth subsequently.

He was subjected to contrast CT of the abdomen which revealed, ruptured intrahepatic abscess (Figure 1 A,B), hence he was subjected to laparotomy which revealed pus in the subdiaphragmatic area and the left hepatic lobe. The pus was drained and peritoneal lavage was performed. He tolerated the surgery well and was managed in the MICU. 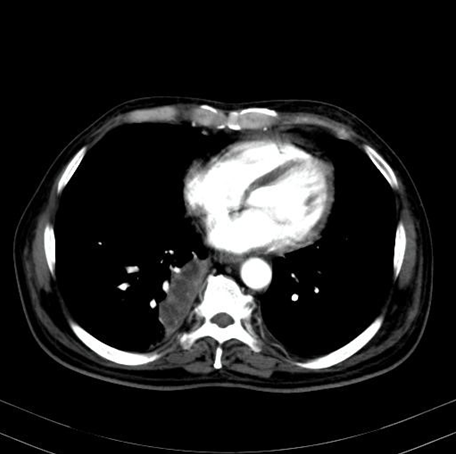 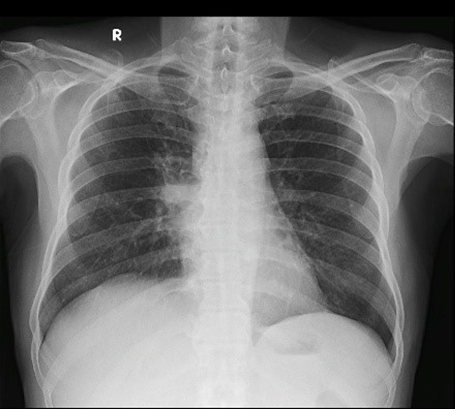 He was advised to continue antibiotics. However, patient deteriorated and became hypoxic (SpO2 86% on room air) and was initiated on oxygen therapy. Respiratory examination revealed polyphonic rhonchi bilaterally, he was treated accordingly.

Bacterial culture of pus from the liver abscess grew Pseudomonas aeruginosa which was pan resistant, with intermediate sensitivity to Doripenem.

He was initiated on a 5th generation Cephalosporin, Ceftaroline 600mg and Metronidazole. Following this he improved gradually and was moved to ward. He was subsequently discharged in a stable state on an extended course of oral Metronidazole and nebulization. He had received a total course of antibiotics of 21 days.

One month later he presented to Pulmonology OPD with persistent cough. Chest X-ray revealed a cystic lesion with air fluid level in the right midzone with the medial border abutting the mediastinal contour (Figure 3). Hence he was subjected to diagnostic bronchoscopy.

Bronchoscopy revealed viscid secretions emerging from the right lower lobe, primarily the superior segment (Figure 4 A,B). Bronchoalveolar lavage was performed and the fluid was sent for culture and analysis.

BAL culture revealed significant growth (15000 CFU/ml) of Burkholderia cepacia which was pan resistant and sensitive only to Meropenem, Minocycline and Ceftazidime.

He was promptly initiated on Inj Ceftazidime + Avibactam and oral Minocycline. He sought discharge and was continued on home-based treatment.

On telephonic follow-up a week later, patient claimed adherence to medication and improvement in symptoms. Unfortunately, very soon after, he developed severe breathlessness and was found unresponsive at his home and expired subsequently at a local hospital. Written and informed consent was obtained from patient’s relatives for the publication of this case report.

Burkholderia cepacia is an aerobic gram-negative, non-fermentative bacillus formerly classified as Pseudomonas. Unlike Pseudomonas aeruginosa, B. cepacia is an organism of low virulence with a limited ability to cause infection in healthy hosts. It has high transmissibility and low virulence and is a frequent colonizer of fluids used in the hospital (eg, irrigation solutions, intravenous fluids, distilled water, nebulizers, dialysis machines, contaminated disinfectants, solutions, and intravenous fluids, catheters, blood gas analyzers, thermometers, ventilator temperature sensors, and intra-aortic balloon pumps).1, 6

Further, its antifungal and degradative properties have resulted in its employment as a pesticide in agriculture, thereby making farmers potential hosts for colonization/infection. 7

B. cepacia is known to exhibit multiple drug resistance and has thus emerged as an important cause of morbidity and mortality in hospitalized patients, particularly among the immunosuppressed. 8 A wide range of presentations have been reported, ranging from superficial to deep-seated and disseminated infections, such as pneumonia, meningitis, peritonitis (in patients undergoing peritoneal dialysis and bronchiectasis. 9, 10

However, B. cepacia is an extremely rare cause of nosocomial pneumonia. B. cepacia cultured from respiratory secretions in hospitalized patients especially those on ventilator support, generally represents colonization rather than infection. Our patient is a farmer, a known asthmatic who had been using nebulizations during his first hospital stay as well as at home. These risk factors are likely causative factors towards his susceptibility to B. cepacia.

BAL culture established the causative organism in this patient, thereby underlying the utility of bronchoscopy, although this patient succumbed to the illness.

Emphasis should be laid on the need for improved aseptic practices while using medical solutions at either hospital or home setting. An index of suspicion may guide optimal antibiotic prescription practices in susceptible individuals.

The author declares no potential conflicts of interest with respect to research, authorship, and/or publication of this article.