Pulmonary thromoboembolism is known among one of “the Great Masquerader” with a grave prognosis if not diagnosed and managed early. High index of suspicion is required for making the diagnosis as the symptoms and signs are nonspecific. A high Wells score has a higher probability of PE.1 The overall risk of venous thromboembolism (VTE) depends on the predisposing environmental and genetic factors. VTE follows as consequence of the interaction between patient related usually permanent risk factors and setting-related usually temporary risk factors. The risk increases in proportion to the number of predisposing factors.2 Diabetes and obesity are considered to be weak risk factors with an odds ratio <2.2 Here we are reporting a case who presented with sudden onset shortness of breath after short term exposure to smoke in an enclosed area and on investigations was diagnosed to have acute PE. This case is presented for the following reasons. Firstly, among the common predisposing factors for VTE smoke inhalation as a provoking factor is rarely described. Acute PE after short term exposure to smoke in an enclosed area is not frequently reported. Secondly, the hs-CRP at the admission was higher in comparision to a followup level. The inflammatory marker levels suggest that short term exposure to smoke in an enclosed area acted as a trigger and initiated acute systemic inflammation in an environment of chronic inflammatory state. Thirdly, the patient had no evidence of inhalational lung injury as a result of exposure to smoke or chemical products of combustion. This patient had no upper airway obstruction, atelectasis, pulmonary oedema and infection or chemical pneumonitis. Fourthly, The clinical probability for PE was low on three level score and unlikely on two level score of Wells point score.1 Lastly, an episode of syncope as one of the presenting symptom of PE.

A 45–year-old male presented with history of dyspnoea which was sudden in onset and progressive for the last 36 hours. Patient was apparently well before the onset of symptoms. On the pre Diwali eve while returning home from the market he noticed smoke coming from his office room located on the ground floor of his house. He opened the door of the room and immediately inhaled the gush of smoke. He entered smoke filled room and found a mattress burning. He switched off all the electrical appliances and rushed out. He didn’t suffer any burns. Two hours later he developed dyspnoea on exertion and consulted the local community health centre. He was reassured and sent back home. The patient continued to have dyspnoea on exertion as well as on rest throughout the night, the next day which was the Diwali day as well as on the Diwali night. In the morning after the festival while walking in his courtyard he had an episode of loss of consciousness for approximately two minutes. He recovered spontaneously and was rushed to the hospital. There were no history of fever, chest pain, palpitations, wheeze, cough, haemoptysis, stridor, dysphonia, dysphagia and sialorrhea. He was a diabetic for the last four years with poor diabetes control, non-smoker and consumed alcohol on social occasions. He had no significant past history. On examination his blood pressure was 76/48 mm of Hg; pulse rate was 112/minute, respiratory rate was 34/minute and had cool sweaty periphery with prolonged capillary refill time. All peripheral pulses were palpable without any delay. SaO2 was 86% on ambient air which improved after oxygenation at the rate of 4-5 L / minute with a facemask. GCS was 15 / 15 without any other focal neurological signs. Jugular venous pressure was not raised. Systemic examination of the respiratory and cardiovascular systems was normal. Review of other systems was normal. His electrocardiogram revealed sinus tachycardia, QTc of 443 msec, left anterior hemiblock and poor progression of R wave from V1-V6 (Figure 1). Central venous pressure (CVP) was 19 cm of water. Patient was started on inotrope infusion. On investigations total leucocyte count was 11,500/cmm. Rest of the hemogram, serum electrolytes, renal, liver functions and lipid profile were normal. Random blood glucose was 335mg/dl and HbA1c was 12.7%. His high sensitivity cardiac troponin I (hs-cTnI) on admission was 23.5 pg/ml [range 28.9-39.0]. The brain natriuretic peptide (BNP) was 334pg/ml. D-dimer was raised and semi-quantitative determination of plasma d-dimer by slide agglutination was >1.0 < 2.0(normal <0.5). His high sensitivity C-reactive protein (hs-CRP) was 25.4 mg/L. Chest x-ray was normal. His bedside echocardiogram revealed mild tricuspid regurgitation (TR) and pulmonary artery hypertension (PAH). Computed tomography (CT) pulmonary angiography revealed massive thrombus in left pulmonary artery extending into segmental branches (Figure 2). Patient was managed with Streptokinase 0.25 million IU stat over 30 minutes followed by 0.1 million IU/h for next 24 hours. He improved hemodynamically and ionotrope was tapered off within 12 hours. Compression venous ultrasound of both lower limbs was normal. His BMI was 32kg/m2. After initial five days of low molecular weight Heparin patient was shifted to oral Dabigartan and discharged. His follow up hs-CRP 10 days later was 6.8 mg/ L. His follow up echocardiogram after two months revealed mild PAH and mild TR. An informed consent of the patient has been taken for publication of this data and images before submission of the manuscript. 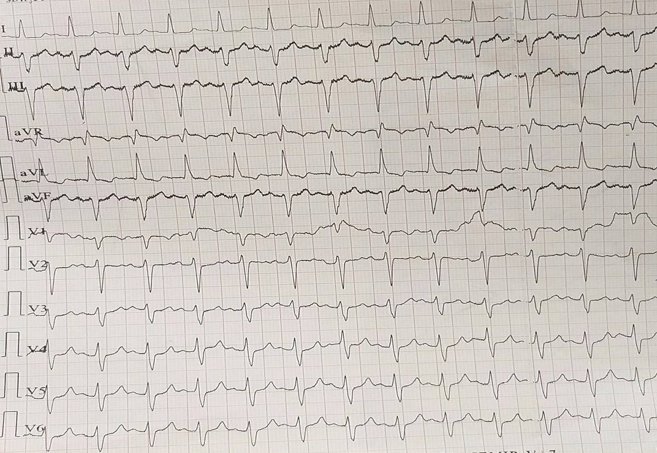 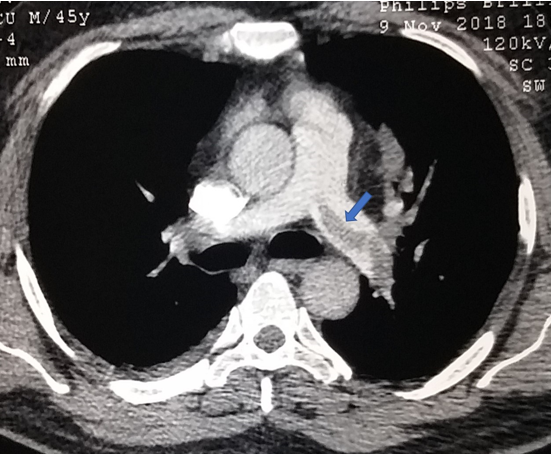 Venous thromboembolism (DVT and PE) is not uncommon in India as traditionally believed. The Indian population also have similar predisposing (risk) factors as their counterparts in the western world and there appears no reason to believe that the prevalence should be any different in India. 3 Traditional predisposing factors for VTE have been described as strong, moderate and weak with specific odds ratios for each group. 2 The patient under discussion had none of the strong or moderate risk factors but had diabetes mellitus and obesity among weak risk factors. We presume that the presence of the two weak risk factors and additional exposure to smoke in a closed space resulted in acute pulmonary embolism. The evidence in favour of the presumption is that patient had a higher hs-CRP level at admission as compared to follow up thus explaining an acute on chronic inflammatory state. Inflammation and thrombosis are interrelated. Inflammation is a trigger for endothelial dysfunction, platelet activation and hypercoagulabilty. A growing interest about air pollution as a risk factor of acute venous thromboembolism has been observed.4, 5, 6 Air pollution is a heterogeneous, complex mixture of gases, liquids, and particulate matter. Epidemiological studies have linked cardiovascular events in relation to both short and long term exposure to present day ambient air pollution. The biological mechanisms involved include enhanced coagulation/thrombosis, a propensity for arrhythmias, acute arterial vasoconstriction, systemic inflammatory responses, and the chronic promotion of atherosclerosis.7 In a retrospective case-control study one month’s exposure to elevated levels of different air pollutants was identified as a possible risk factor for the development of acute isolated PE. It was concluded that the onset of acute isolated (i.e. without deep vein thrombosis) pulmonary embolism (PE) is due to a potential direct damage by exposure to fine particulate matter to the lung vasculature.8 To summarize, exposure to air pollution should be considered a risk factor for unprovoked acute isolated PE.

The authors declare no potential conflicts of interest with respect to the research, authorship, and/or publication of this article

The authors received no financial support for the research, authorship, and/or publication of this article